Stallings coughs up lead down the stretch at Humana 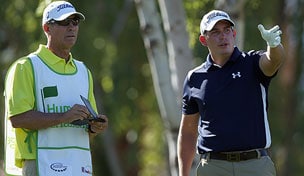 LA QUINTA, Calif. – Perhaps it was only fitting that after Scott Stallings took a drop on the 72nd hole Sunday, and needing to get up-and-down to join a four-man playoff, his ball rolled into a pile of geese feces. A nasty day, indeed.

His tortuous decline at the Humana Challenge can be described thusly: Five ahead at the start of the final round, up by six after four holes, tied at the turn, and then, incredibly, one shot out of a playoff after a watery bogey on the final hole.

“Coming down the stretch on the 18th hole,” Stallings said afterward, “you can’t make mistakes like that. And it stinks” – no pun intended – “but it’s something that I’ll definitely learn from.”

Five-shot leads on Tour used to lead to back-nine coronations.

Last year alone, seven players – from a newcomer like Kyle Stanley (Phoenix) to a seasoned veteran like Phil Mickelson (Pebble) – rallied from six or more strokes in the final round to win. And the Humana isn’t immune from the improbable comeback, either. Here in 1999, of course, David Duval authored the signature moment in this tournament’s history, shooting a final-round 59 to win after he trailed by seven.

“That is the nature of the tournament,” Stallings said. “Anyone who thinks they’re going to run away with it is fooling themselves. I never once said I was running away with it. I was very fortunate to have a big lead.

“I played good for three days, and it is kind of weird in this kind of marathon, low-round tournament, you’re going to kind of catch a skid here and there. And the person who survives the best, wins. Unfortunately, I just hit a bad shot.”

That bad shot: a 6-iron from 220 yards from a slightly hanging lie that drifted left, the one place it couldn’t. His ball crossed the hazard but trickled into the water.

Other miscues, however, proved just as costly.

On No. 2, Stallings roped a beautiful long iron to 9 feet to set up a possible eagle. Left the putt a foot short.

Said his caddie Frank Williams, “He was never really comfortable after he missed that short one on 6.”

Still, Stallings broke out of a tie with Gay by birdieing Nos. 10 and 11 to start his back nine. But his 4-iron tee shot on the par-4 16th was “flushed” and sailed into the bunker, near the lip, and he had no choice but to chop out, leading to a bogey.

On 17, Stallings stared down his tee shot on the dangerous par 3, thinking it would be close, but his ball landed just short of the ridge and trickled back some 40 feet.

And then came 18. After a massive drive left him only 220 yards – perfect 6-iron distance – he pulled his approach just slightly and found the water. He couldn’t get up-and-down after missing an 8-foot par putt, leaving Gay, David Lingmerth (62) and Charles Howell III (64) to battle for the title.

“The golf course is very susceptible to low scores,” said Stallings, who opened here with 66-65-63. “I happened to make low scores the first couple of days, and I hadn’t really had kind of an off-day yet. I just hit some weird shots at not a good time.”

A victory at the Humana would have been Stallings’ third Tour title in the past 19 months; only world No. 1 Rory McIlroy (four) has more during that span. Still, Stallings remains the quintessential streaky player. Excluding the two victories, he has only four top 10s in his other 56 career starts.

Yet, he gushed about his union late last year with Williams, who looped for Stewart Cink for the past 14 years, including during the 2009 British Open. Stallings on Sunday described the relationship as having given him a “big shot in the arm,” and already he has had two opportunities to win in seven starts together (Disney, Humana).

“He knows he’s playing good,” Williams said afterward. “He’s a heck of a player. He’s got all the shots. And I think it was kind of tough for him coming out with a five-shot lead and being an aggressive player. He hadn’t really been in that situation.”

Said Stallings, “It’s disappointing, but at the end of the day, I get to play this game for a living. You’re going to have your good days and your bad days, but if you live and die with every shot out here, your career is not going to last very long.”