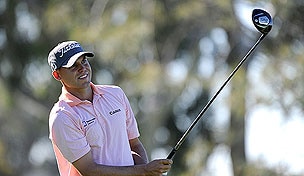 SCOTTSDALE, Ariz. – Many players in this week’s Waste Management Phoenix Open field will play to the crowd on the famous 16th hole and maybe toss a few souvenirs their way.

Bill Haas isn’t one of them. He’s here on business.

Haas has been plenty focused through the first two rounds. With scores of 65-64, he’ll enter the weekend in second place, just four strokes behind leader Phil Mickelson.

On Friday, he credited his start for his impressive performance.

“Birdied 10 and 11 right out of the gate, so that kind of frees you up a little bit,” he explained. “Kind of making a bunch of pars there on the front nine and then making a birdie on 7 is one of the harder holes on the course, and that makes you feel pretty good there on the back nine.”