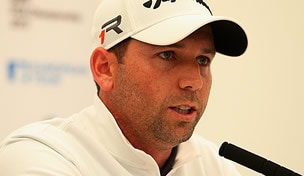 Acknowledging Wednesday that his comment was “stupid and out of place,” Sergio Garcia again apologized to Tiger Woods and anyone else he may have offended with his racially insensitive remark at the European Tour awards dinner.

On Tuesday night in Wentworth, England, at a black-tie gala attended by some 500 people – including both PGA Tour commissioner Tim Finchem and European Tour chief executive George O’Grady – Garcia was asked in jest whether he would invite Woods over for dinner at the U.S. Open next month.

Garcia replied: “We will have him round every night. We will serve fried chicken.”

Within an hour the Spaniard apologized in a statement, saying the remark was “silly” and that it was not meant in a “racist manner.”

The comment was reminiscent of what Fuzzy Zoeller said at the 1997 Masters, when he urged Woods not to serve fried chicken or collard greens at the following year’s Champions Dinner, though Garcia said he was unaware of that previous incident.

“As soon as I left the dinner, I started getting a sick feeling in my body,” he said. “I didn’t really sleep at all last night. I felt like my heart was going to come out of my body. I had this sick feeling all day.”

In his news conference Wednesday, Garcia once again denied that his comment was racially motivated.

“It wasn’t meant that way,” he said. “I was caught off-guard by what seemed to be a funny question and tried to give a funny answer that came off totally wrong. I want to make sure that everybody knows that I’m very, very sorry. I can’t apologize enough times.”

On Wednesday morning, Woods responded in a series of tweets, writing, “The comment that was made wasn’t silly. It was wrong, hurtful and clearly inappropriate. I’m confident that there is real regret that the remark was made. The Players ended nearly two weeks ago and it’s long past time to move on and talk about golf.”

Garcia said that he reached out to Mark Steinberg, Woods’ agent, and left a message, apologizing.

“I’m terribly sorry about what happened,” Garcia said, “and I’m sure we’ll be able to talk soon and I’ll apologize to (Woods), face to face.”

On Wednesday, Garcia also met with both Finchem and O’Grady to discuss the incident. Garcia said that he was told that he would not be subject to any disciplinary action, and that he would still tee it up at this week’s BMW PGA Championship, the European Tour’s flagship event.