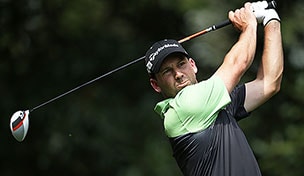 Pristine conditions greeted players and patrons alike Thursday at Augusta National Golf Club, where low scores were there for the taking in the first round of the Masters. Here is how things stand after 18 holes, as Sergio Garcia and Marc Leishman share the early lead in the season's first major:

What it means: With ideal conditions and little wind, players took full advantage Thursday at Augusta National, as 45 of the 93 players in the field were able to shoot par or better. While two share the lead at 6 under, several players were able to break par and remain within striking distance, including Tiger Woods (70) and Phil Mickelson (71).

Round of the day: Garcia's round began with a birdie on the first hole and only improved from there. The Spaniard added red numbers at 3 and 6 en route to playing his first 10 holes Thursday in 5 under. Ultimately, Garcia would notch six birdies without dropping a shot, breaking a string of eight straight over-par rounds at Augusta National with a sterling 66 in the opening round.

Best of the rest: While Leishman deserves credit for matching Garcia's 66, one of the day's more eventful rounds belonged to Fowler. After opening with a double bogey on the first hole, he played the next eight holes in 4 under to get his round back on track before faltering with another double bogey at 10. He was able to erase with an eagle at 15, though, ultimately becoming the first player since Raymond Floyd in 1992 to shoot in the 60s at Augusta despite two double bogeys. In total, his route to a 4-under 68 was as follows: two double bogeys, six birdies and an eagle. Pretty standard stuff, really.

Biggest disappointment: With all of the distractions facing a defending champion at this event, it should not be entirely surprising that Bubba Watson got off to a slow start Thursday. Still, Watson's opening round of 3-over 75 remained a disappointment, putting the southpaw into a tie for 64th after the first round. He was able to muster just one birdie against three bogeys, failing to birdie either of the par-5 holes on the second nine Thursday.

Main storyline heading into Friday: A year after telling reporters at Augusta that he was not equipped to win a major title, can Garcia continue his fine form into the weekend? The Spaniard has contended in several majors before, but questions have always lingered about whether he has the mental toughness to become a champion. The Spaniard has a chance to silence his critics with more play the likes of which he displayed on Thursday.

Shot of the day: Jamie Donaldson was in the midst of an inauspicious round when he stepped to the tee at the par-3 sixth hole. There, the Welshman fired a 7-iron from 180 yards downhill that barely left the flag, ultimately finding the hole for an ace en route to a 2-over 74 Thursday. It was just the 24th hole-in-one during competition in Masters history, and the first recorded at the sixth hole since Chris DiMarco pulled off the feat in 2004.

Quote of the day: 'I feel really good with the putter ... and I can't wait to get back out on the course tomorrow, because I feel like I can light it up.' – Mickelson