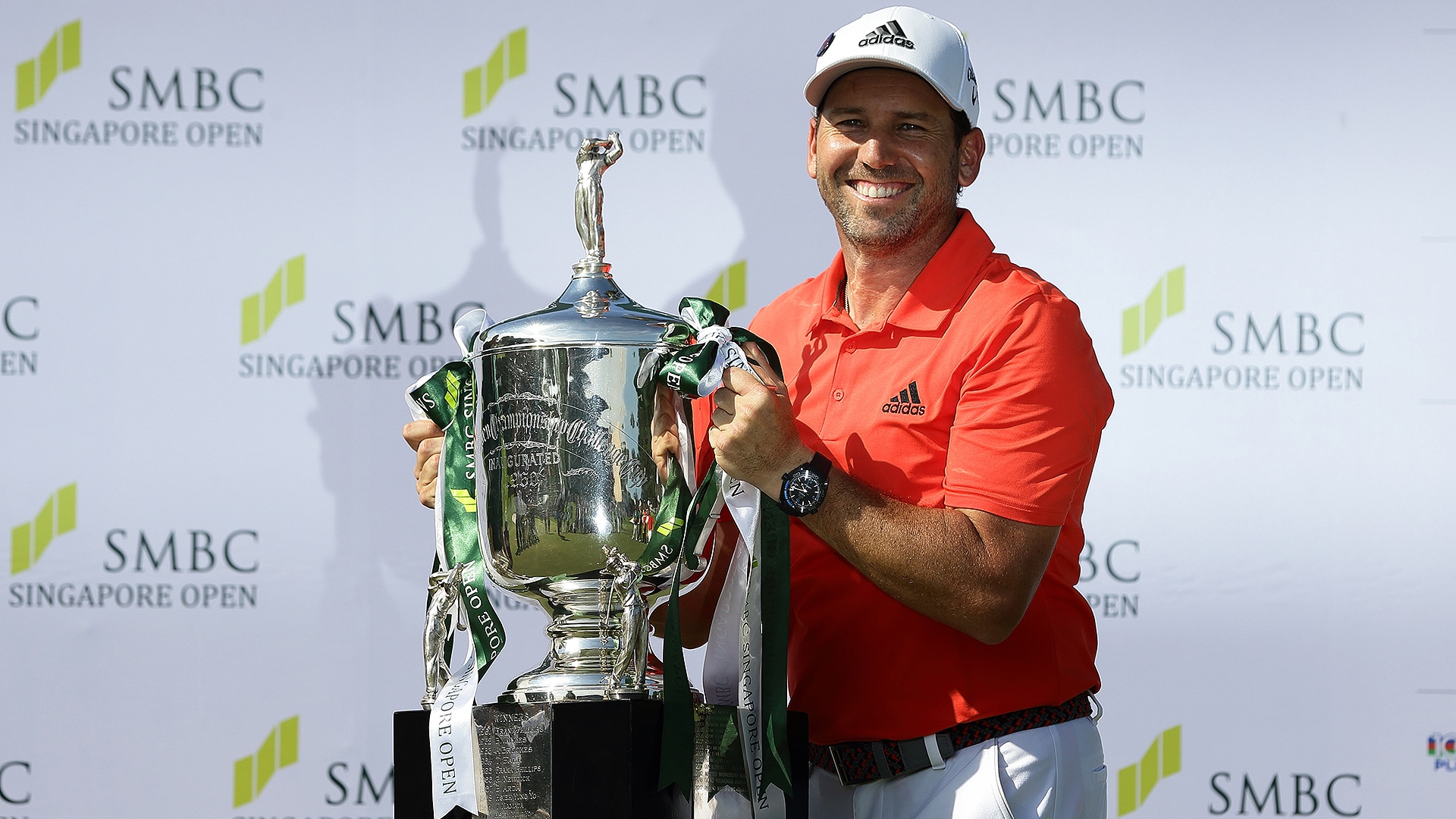 SINGAPORE - Sergio Garcia played 27 holes on the last day without dropping a shot to win the Singapore Open by five strokes Sunday in an ominous display of his newfound self-belief as he prepares to defend his Masters title.

Still brimming with confidence after claiming his first major title at Augusta National last year, Garcia started his new season with a runaway victory at the Sentosa Golf Club, finishing at 14-under 270.

Returning to the course just after dawn to complete his third round after play was suspended on Saturday because of lightning strikes, Garcia finished his last nine holes in 4 under for a round of 66 to take a one-shot lead into the final round.

With organizers desperate to avert the constant threat of more bad weather and finish the tournament on time, Garcia promptly returned to the first tee shortly after and fired a flawless 3-under 68, cruising to victory with 10 straight pars as his rivals floundered in the stifling humidity.

''It may have looked easy, but it wasn't easy. You still have to hit a lot of good shots out there,'' Garcia said. ''It's always great to start with a win, to do it here at this golf course against a good field in Asia on conditions that weren't easy. Hopefully I can ride on this momentum.''

Garcia's closest rivals at the end were Japan's Satoshi Kodaira (71) and South African Shaun Norris (70). Both birdied the last hole to share second spot but neither was ever close enough on the last day to challenge the leader.

Jazz Janewattananond (71) and his fellow Thai Danthai Bonnma (73) finished equal fourth at 8 under, earning themselves a spot in this year's British Open, while American Sean Crocker, who was given an invitation to the event after turning pro late last year, also won a place at Carnoustie by finishing in a tie for sixth.

Garcia made just three bogeys in 72 holes and his victory provided the 38-year-old with the 33rd title of his professional career and his sixth on the Asian Tour.

He has also won three titles in the last 12 months, including the Masters, and his game looks to be in better shape now than it was a year ago.

He credits the Singapore Open as having played a part in toughening him up for Augusta National because of the steamy conditions and the testing stop-start nature of the tournament, which is regularly stopped because of inclement weather.

Although he finished tied for 11th in Singapore a year ago, Garcia won the Dubai Desert Classic the next week and was in peak form when he won the Masters two months later.

"I'm extremely happy with how the week went. It was a tough day and a tough week, with the stopping and going. Fortunately, the weather held on. Still, it was hard to play 27 holes under this heat and I can't wait to get a cold shower,'' Garcia said. ''I came with some good confidence and wishing that I will play well. I hit the ball solid the whole week and didn't miss many shots.''