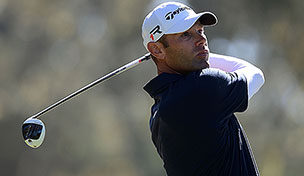 Getty Images
NEWPORT, WALES - JUNE 02: Philip Price of Wales in action during the Pro Am prior to the start of the Celtic Manor Wales Open on The Twenty Ten Course at The Celtic Manor Resort on June 2 2010 in Newport, Wales. (Photo by Andrew Redington/Getty Images)  -

PALM HARBOR, Fla. – Shawn Stefani – pronounced Stephanie, no relation to Gwen – moved and grooved his way to the top of the Tampa Bay Championship leaderboard on Thursday with a 6-under 65 in his first ever competitive round at Innisbrook.

While the 31-year-old Houston resident welcomes the associations people make between his last name and that of Gwen Stefani, he’s more of a boot scootin’ boogie man than a 'Hollaback Girl' ... or guy.

'I love George Straight,' Stefani beamed when asked about one of his favorite artists. 'He's coming to Houston, March 17th I think.'

That's not to say he isn't familiar with No Doubt's former leading lady and her work.

'I have (listened to Gwen Stefani's music) in the past. More of a country guy. She doesn't make any music – or doesn't make as much music as she used to. I've got a few wedges that have a few stamps on them from the band, No Doubt and got another one that says 'Hollaback,' the song.'

So there's a few people out here that call me Stefani and some people call me Gwen. Never been a big issue with it, but it's kind of fun.'