SHO to return to usual pre-Masters spot in '14 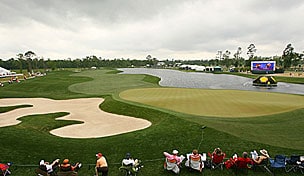 Here is some news that should please Phil Mickelson: The Shell Houston Open will return to its usual pre-Masters spot on the schedule in 2014.

This year, the tournament was moved two weeks before the year’s first major because Easter was so early. That won’t be an issue in 2014, when Easter will fall on April 20.

“I feel fine about it,” Houston Golf Association president and SHO tournament director Steve Timms said Monday, according to the Houston Chronicle. “It’s kind of where we’ve been on the schedule historically and the players have gotten used to us having that spot. I’m sure we’ll (attract) another high-quality field.

“We got a couple guys in here this week who hadn’t played the course in a few years and really liked it” – namely world No. 2 Rory McIlroy – “so maybe we’ll get them back.”

For the past few years, Redstone Golf Club has been a popular destination for players hoping to fine-tune their games for the Masters. The course is set up very similarly to Augusta National, with speedy greens, shaved mounds around the putting surfaces and green-to-tee mowing patterns.

Now, though, those players looking for a final tune-up will head to the Valero Texas Open. Though the switch was known for nearly a year, Mickelson last week expressed his disappointment.

“I haven’t taken the week off before the Masters in a couple of decades,” he said. “But I’m going to have to learn how to do that now that we’re not really having tournaments conducive to getting ready for those tournaments.”