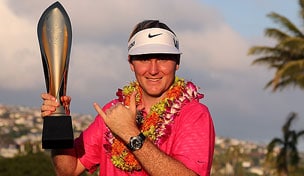 For a rookie, Russell Henley sure handled the final round of the Sony Open like a seasoned veteran.

Swinging with the same ferocity as he had Thursday afternoon, Henley pulled away from close friend and fellow rookie Scott Langley on Sunday and turned the back nine at Waialae into a coronation. When it was over, Henley had a three-stroke victory over Tim Clark, his third title in his past five pro starts, a spot inside the OWGR top 50, an invitation to The Masters, and, perhaps more importantly, a bit more job security. After all, the 23-year-old graduated from Georgia less than two years ago.

“I don’t really know what just happened,” Henley said. “This is the most nervous I’ve ever been and that’s the hardest thing I’ve ever done. I’m kind of speechless right now.”

Closing with a back-nine 29 and a final-round 63 to finish at a tournament-record 24-under 256, Henley became the first rookie in 12 years to win in his PGA Tour debut (Garrett Willis, 2001 Tucson Open).

Said NBC’s Johnny Miller: “It’s a performance that makes you think, This guy might be the next really, really top player.”

Henley and Langley were paired together for the fourth consecutive day, this time with a lot more on the line. And it wasn’t long before Henley got the upper hand.

On the opening hole he brushed in a short birdie putt, and then found himself two shots clear after Langley flubbed his pitch and made bogey. (Langley eventually finished T-3, seven strokes back.) Henley made bogey on No. 8 – his first dropped shot in 50 holes – to cut his advantage to one. Back-to-back birdies around the turn gave him a little cushion, and, just for good measure, he closed with birdies on his last five holes to win by three. His 24-under total was the lowest ever for a PGA Tour rookie.

That’s fitting, for his learning curve has been an accelerated one. In 2010, after winning four times during his junior season at Georgia, Henley shared low-amateur honors (with Langley) at the U.S. Open, where he tied for 16th. A year later, and just weeks before graduating, the Macon, Ga., native became only the second amateur to win on the Web.com Tour, at the Stadion Classic, contested on the Bulldogs’ home course.

Having accepted membership for the 2012 season, Henley won twice at the end of the year on the Web.com circuit to punch his ticket to the Tour, eventually finishing third on the money list. That good form has already carried into his rookie season, as Henley hasn’t shot worse than 70 in his past 20 rounds, dating to September. His scoring average over that span: 67.15.

At Waialae, Henley opened with back-to-back 63s, which was barely enough to stay ahead of Langley, the 2010 NCAA champion from Illinois and a good friend, dating to their days as Palmer Cup teammates.

A Saturday 67 gave Henley a spot in the final group, and he said after the third round, “Win or lose, I’m not really too stressed out about the outcome, honestly. I feel a lot less stressed than normal in this situation for some reason, just because I’m having so much fun and I know it’s going to be a positive experience either way.”

This was a positive experience, indeed.