Confirmed: No fans, pro-ams for rest of PGA Tour season

Update (Monday, 11 a.m. ET): The Tour has confirmed that the rest of the season, including the FedExCup Playoffs, will be played without fans and pro-ams.

“As we have said from the start, our No. 1 priority remains the health and safety of everyone in the communities where we are invited guests each week,” said PGA Tour chief tournaments and competitions officer Andy Pazder in a statement.

DUBLIN, Ohio – Multiple sources have confirmed that the PGA Tour plans to play the remainder of this season’s events without fans or pro-ams.

Next week’s Memorial had been scheduled to be the first event since the COVID-19 pandemic halted play in March to be played with fans, although the plan called for a limited footprint of about 8,000 fans per day. Last week the Tour reversed course and announced the event will be played without fans. 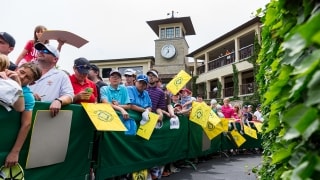 According to various sources, on Monday the Tour, in collaboration with individual tournaments, will extend that plan to play without fans at the season’s remaining nine events, including the three FedExCup playoff stops.

According to a Tour spokesman there is “nothing coming officially from the Tour,” and the move appears to be independent of how the PGA Tour Champions or Korn Ferry Tour plan to handle fans and pro-ams.

The move to play without fans for the rest of the season is a response to increased coronavirus outbreaks across the country.

In last week’s announcement to not have fans at the Memorial, Tour commissioner Jay Monahan referred to “the broader challenges communities are facing,” and said the focus was now on “the health and safety of all involved.” The commissioner added that the Tour would welcome fans, “when the time is right.”

“With everything going on and the health and safety concerns and everything that the Tour has done up to this point, I've got to stand with them as far as saying it's the right decision, and I think we're seeing that there's been some more spikes and nothing has necessarily calmed down,” Rickie Fowler said on Saturday at Muirfield Village.

It remains unclear if the Tour plans to allow fans in the fall when the 2020-21 schedule begins.