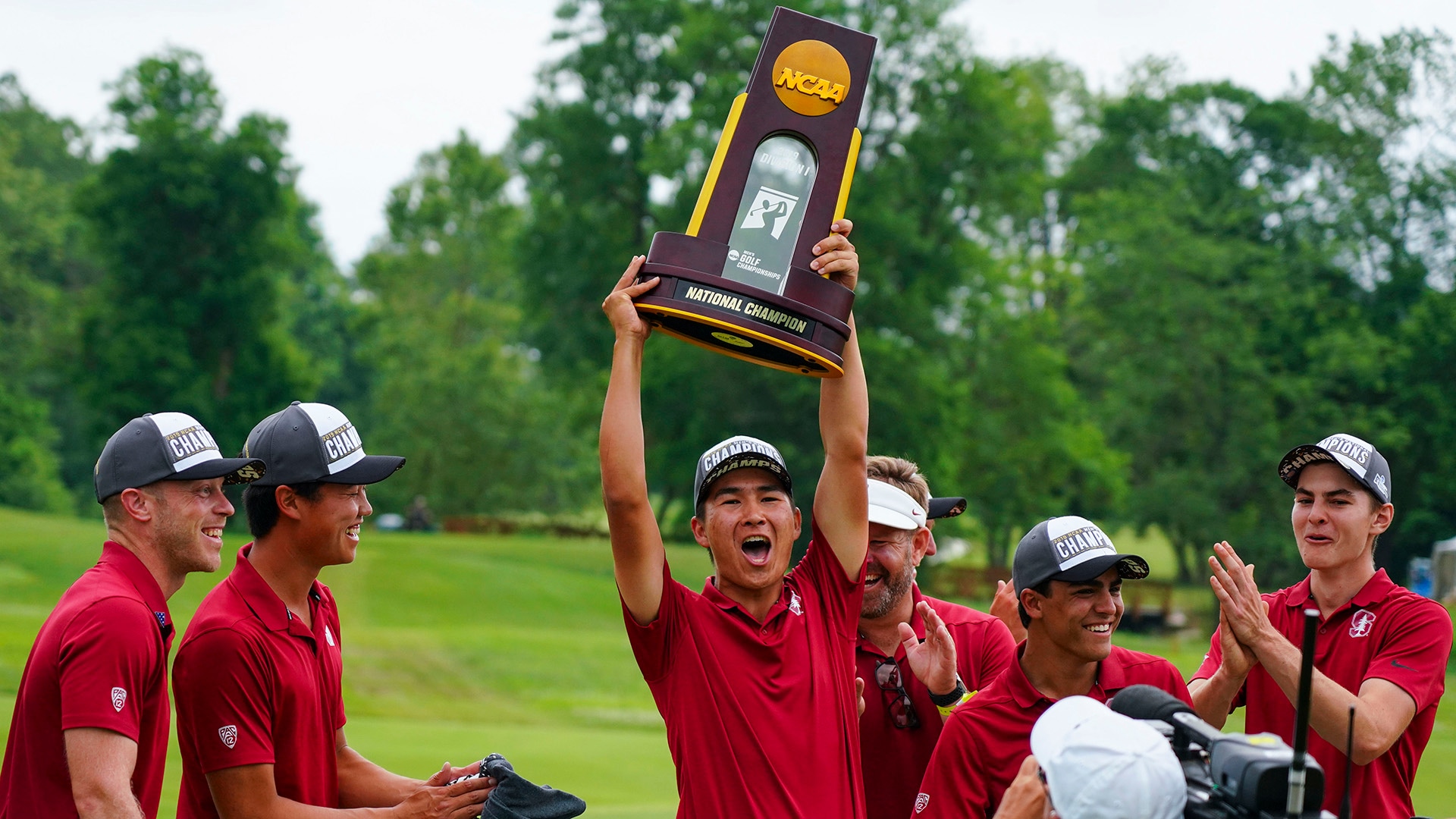 FAYETTEVILLE, Ark. – With three matches in a 27-hour period on a 7,550-yard golf course, the final match of the NCAA Championship was always going to be a test of endurance.

No team was more prepared to handle the rigorous finish than Stanford.

All season, the 10th-ranked Cardinal trained their games, minds and bodies to peak at the right time. They won each of their final four tournaments and grabbed momentum by the horns entering this week’s demanding test at Blessings Golf Club, where Wednesday they were the last team standing after a 3-2 victory over Texas in the final.

“We pushed these guys harder than any team I’ve ever coached,” said Stanford head coach Conrad Ray, “and they responded.”

Stanford’s victory marked the program’s ninth NCAA title and first since 2007. In recent years, though, the Cardinal had developed a reputation for being soft when it mattered most. After advancing to the NCAA semifinals in 2014, Stanford failed to make it past the 54-hole cut in four straight championships.

“That was definitely a bitter experience,” said senior Brandon Wu, who had been a part of three of those early exits, “but obviously we’ve learned from that.”

After Stanford finished eighth or worse in each of its three stroke-play events in the fall, Ray knew his squad needed to toughen up. He added a Friday morning workout to the team’s weekly training schedule. The high-intensity conditioning, led by assistant coach Matt Bortis, likened to a boot camp for golfers, so the team coined the hourlong sessions, “Bortis Camp.”

Bortis, who played three years at Arkansas before becoming an All-American at Texas as a senior, spent eight years in the Marine Corps prior to taking the Stanford job last October.

“Without a doubt, I’d say that we were the underdogs, but I think some of the stuff that we’ve been doing together has proven guys otherwise,” Bortis said. “They are a pretty mentally strong group of guys. When it comes to the endurance and physical fitness, these guys have been working a lot harder than most.”

Stanford proved it had fortified itself this spring. The Cardinal cut their teeth on difficult golf courses, beginning with a third-place showing at Southern Highlands, before rattling off five straight wins to close the season. (Since 2000, only 2013 champion Alabama had ended a season with more consecutive victories.)

“I felt like the momentum shifted [in Las Vegas],” Ray said, “and from that moment forward, they didn’t look back.”

The Cardinal were arguably the hottest team in the country when they arrived at Blessings, only to be overshadowed – along with the rest of the field – by top-ranked and reigning NCAA champion Oklahoma State. The Cowboys, led by NCAA individual champion Matthew Wolff and Hogan Award winner Viktor Hovland, rolled in stroke play, winning by 31 shots and finishing 53 shots better than Stanford, which had leaked oil coming with a 35-over performance in its final 36 holes to settle for the sixth seed.

But while Oklahoma State was upended in the semifinals by Texas, Stanford showed the key to staying power was not the standout play from a few stars, but rather a cohesive and clutch effort from its entire unit.

Every guy factored into the equation of this championship formula.

In the quarterfinals, senior Isaiah Salinda found himself 4 down at the turn to Wake Forest’s Eugenio Chacarra. Growing up in a blue-collar family in San Francisco where his dad operated at forklift at the post office and his mom worked nights, Salinda developed a chip on his shoulder, which spurred him on to becoming the 14th-ranked amateur in the world.

Against Chacarra, Salinda clawed back to win, 3 and 1, and set the stage for David Snyder. The stubborn junior from McAllen, Texas, butted heads with Ray earlier in his college career and failed to make the lineup in three of the team’s first five events this season. However, he earned his place with his grit and tenacity, and finished second at The Goodwin and the NCAA Stanford Regional.

Snyder isn’t the best ball-striker, but he scraped it around against Wake’s Lee Detmer and sent Stanford through with a birdie on the final hole.

In the semifinals, it was freshman Daulet Tuleubayev’s turn. Born in Kazakhstan, Tuleubayev had the most unlikely road to Stanford, but he’s impacted the team with his energy and enthusiasm.

In his match against Vanderbilt’s Harrison Ott, Tuleubayev played nine holes without a driver after cracking the clubhead on his opening tee shot and waiting 13 holes to have it replaced. He also surrendered a 4-up lead after three holes to enter the 18th all square. But Tuleubayev, with a smile on his face, drained a 24-footer for birdie to punch the Cardinal’s ticket to the final.

Wu, who long struggled with the belief that he was a great player, finished the week 3-0 in match play. The world’s 12th-ranked amateur never reached the 16th hole, either.

“You can’t script a better ending to your career,” Wu said.

Junior Henry Shimp broke his wrist as a freshman and was forced to redshirt a year. He had just one top-10 finish all season. Yet Ray calls the junior from Charlotte, N.C., the team’s most confident player, which is why when Ray decided to frontload his lineup for Wednesday’s final, he put Shimp in the leadoff spot.

The strategy paid off as Shimp rallied from an early 2-down deficit to defeat Spencer Soosman, 2 and 1, and earn the clinching point for the Cardinal.

“We get off to such a tough start in the year,” Shimp said. “As Coach Ray has said, I think we’ve worked harder than any Stanford team ever has. Working out, going to class, grades have been great this year, practicing really hard. To cap it all off with an NCAA Championship is something incredible.”

The threat of severe weather pushed tee times all the way up to 6:45 a.m. Wednesday, meaning the Stanford and Texas players would only get about five hours of sleep before their championship tilt.

“It almost felt like as soon as we walked off the course yesterday we were back here playing,” said Texas senior Steven Chervony, who sunk the winning putt for the Longhorns in a thrilling upset of Oklahoma State in the semifinals.

The thrill of competing for a national title was enough to energize Texas early, as the Longhorns led four of the five matches at one point on the front nine. But fatigue clearly set in, even if Texas was adamant not to make excuses. Stud freshman Cole Hammer started fighting his swing on the back nine and fell to Salinda on the 15th hole. Wu made quick work of Pierceson Coody. And Shimp sealed the deal soon after.

“Momentum is a real thing in college golf,” Wu said. “Once we started to get on a roll, I think we couldn’t stop.”

Wednesday’s early finish, just before 11 a.m., sucked some of the atmosphere out of the celebration. There was no green-storming like Eugene in 2016. There was no sea of home-crowd fans like Stillwater last year. Even a tornado warning cancelled the victors’ press conference.

But there was still one champion – and not the Nerd Nation we’ve grown accustomed to in recent years. No, this was a stronger, tougher, deeper Stanford. 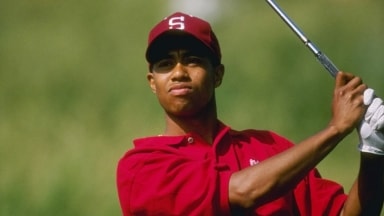 Just as Tiger Woods finished his Wednesday pro-am with Peyton Manning at the Memorial, his alma mater was finishing off the Texas Longhorns to win the team's ninth national championship. 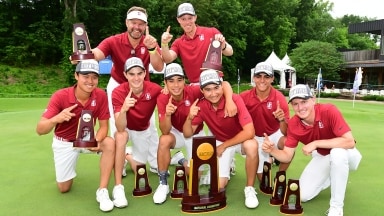