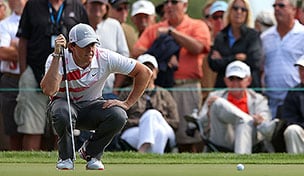 AUGUSTA, Ga. – The most important man at Augusta National this week without a spot in the field may be Dave Stockton Sr.

Among the short game guru’s stable of players is Rory McIlroy and Phil Mickelson, perennial contenders at what is considered the game’s ultimate putting contest.

On Monday, as Stockton prepared for perhaps his most demanding work week of the year, the 12-time Masters participant didn’t seem overly concerned with either of his high-profile players or the daunting task ahead.

“I don’t think that there is any concern with (McIlroy’s) game,” said Stockton, following the Ulsterman’s runner-up finish on Sunday at the Texas Open. “It was important to get the reps. I texted him when I heard (he was adding the Texas Open) and said it was a really brilliant thing to do.”

As for the other guy, Stockton said despite Mickelson’s continued tinkering with his putting, he has a tendency of figuring things out at Augusta National.

“Well if you want to call three different putters and three different grip sizes tinkering (in Houston),” smiled Stockton, who added that Mickelson settled on a conventional putting grip with an oversized grip. “It seems to have been extra interesting this year with Phil and I.”