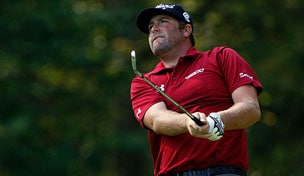 Getty Images
NORTON, MA - SEPTEMBER 03: Steve Marino watches is tee shot on the eighth hole during the second round of the Deutsche Bank Championship at TPC Boston on September 3, 2011 in Norton, Massachusetts. (Photo by Michael Cohen/Getty Images)  -

Not just because the Virginia native is a diehard Redskins fan, but because he had a similar surgical procedure in the same facility last year.

After meniscus surgery in his left knee 15 months ago, Marino made six starts early in the 2012 season before having more difficulty. He rehabbed and tried to return on multiple occasions, only to have more pain. After a recommendation from Dr. James Andrews – the same surgeon who oversaw RG3 – Marino received a stem cell injection late last summer and remained shelved for the rest of the year.

“It’s supposed to regenerate growth in damaged or dead cartilage or tissue,” Marino explained. “It’s kind of a new science; they’ve been doing it with some other athletes, especially football players, and he said, ‘You know, we can go in there and do another surgery, but you would run the risk of maybe making it worse.’ So yeah, I went with the option of the stem cell injection and so far it’s worked out really well for me.”

This week Marino makes his return to competition at the Sony Open. He just started playing golf again three months ago, but maintains that “everything feels great.”

“It feels really good to be back,” he added. “Last year was kind of a nightmare, but I did everything that I had to do to get back and try to get as healthy as I could. I’m just real excited to be back playing again and I’m real excited about the year.”

As part of his major medical extension, Marino has 21 starts in which to earn $562,470, which would equal No. 125 on last year’s money list and clinch his full exemption for the 2014 season.