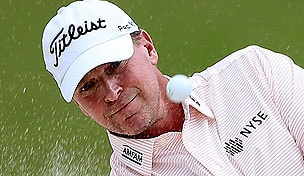 Stricker made news at the end of last season when he announced that he’d only play 11 tournaments this year on the PGA Tour and that he had no intentions of playing in big-money FedEx Cup playoff events at the end of the season. He simply wants to spend more time with his family.

Well, with wife Nicki on the bag all four days, Steve put together another great week at the WGC-Cadillac Championship to collect his second runner-up finish in three events. Sticker finished second at the Hyundai Tournament of Championship and was ousted in the quarterfinals of the WGC-Accenture Match Play Championship two weeks ago in Arizona.

Here at Doral, Stricker shot 67-67-69-68 for a 17-under-par total to finish two shots behind Woods. The irony is that Woods asked Stricker to take a look at his putting on the eve of this tournament. That putting session resulted in the best putting performance of Woods’ career, needing only 100 putts in four days.

“Who knows, he might have putted just as good without my help,” Stricker said. “He feels really good about what he’s doing on the greens, so that’s a good thing.”

Said Woods, when asked if he’d had putted as well without Stricker’s help: “I would like to say I probably would have. But…there’s a but there.”

Stricker will take two more weeks off before heading to the Shell Houston Open, a tournament he committed to earlier this year as part of his 11 events. Two weeks after that he’ll play The Masters.