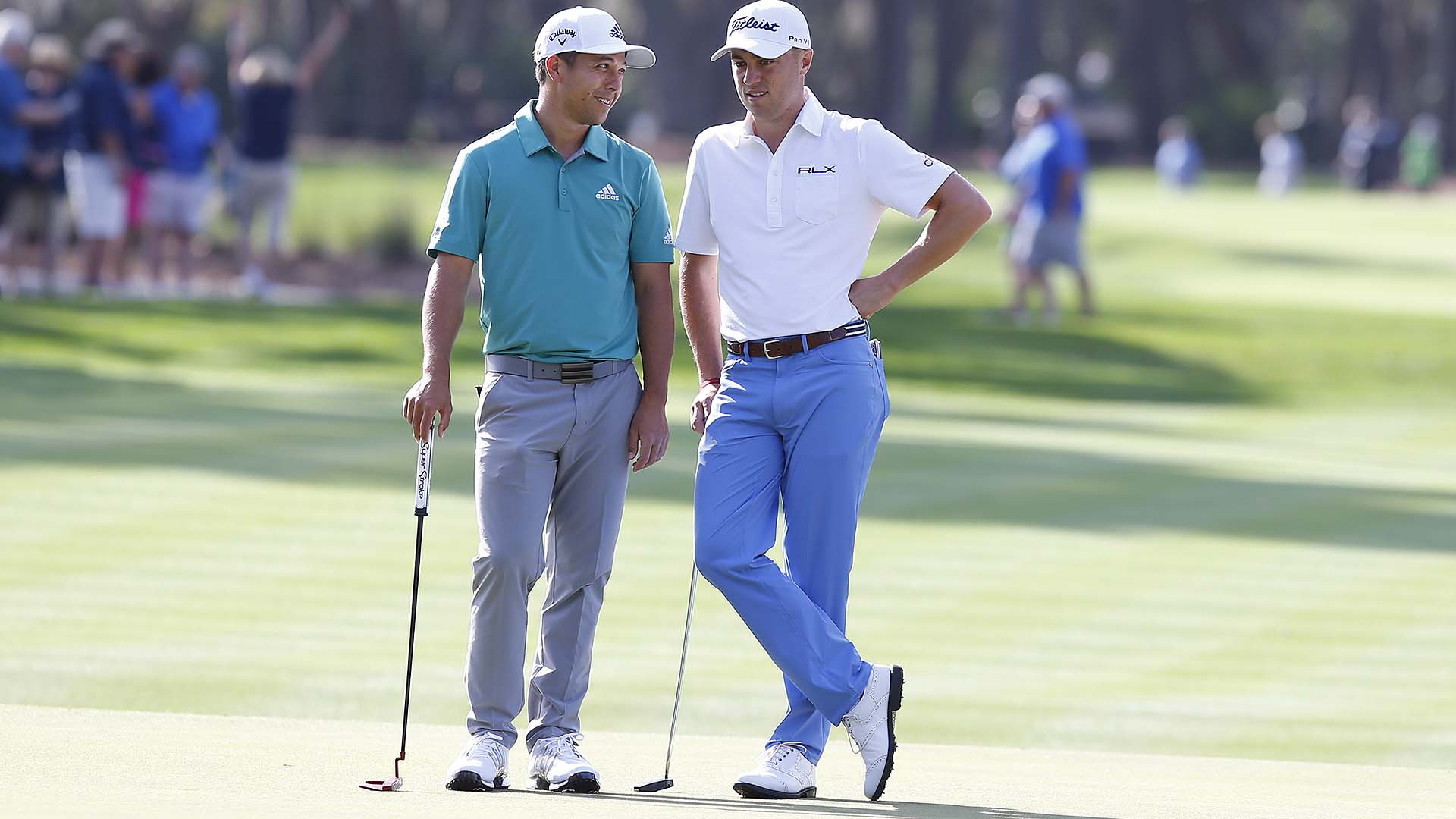 There will be no shortage of talent out on the course in front of them – it is a winners-only field – but Sunday at the Sentry Tournament of Champions might well turn into a two-man race.

Fresh off a third-round 71, Xander Schauffele (11 under) leads Justin Thomas by one through 54 holes in Maui, and those two have the power to separate themselves the pack, especially on this golf course.

A pair of past champions, Thomas won the TOC back in 2017, and Schauffele is looking to become the third player to go back to back at Kapalua.

It was a year ago that Schauffele tied the Plantation Course record with an 11-under 63  on Sunday to clip Gary Woodland and steal victory. Believe it or not, that was a round that opened with a bogey, before Schauffele played the final 17 holes in 12 under par, with eight birdies and a pair of eagles.

To date, Schauffele has claimed all four of his PGA Tour wins coming from behind, and he has limited experience as a frontrunner. In that capacity, he’s 0 for 1, having turned a 54-hole co-lead at the 2018 Open into a runner-up finish behind Francesco Molinari after a final-round 74.

“This is a new realm I’m in – sleeping on a lead,” Schauffele conceded. “I’m not sure if I‘ve slept on a solo lead before.”

“I‘m sure I‘ll sleep great,” he added. “I’m tried. I’m pretty worn out today, honestly. I think these hills are a little bit wetter than they were before.”

The high winds and often-wet conditions that have whipped players for three days will likely prevent Schauffele – or anyone else – from authoring another final-round 63, but the leader will need every bit of a firepower he has to hold off his playing partner.

In four final rounds at Kapalua, Thomas owns a 67.5 scoring average on the par-73 layout, having never signed for worse than a Sunday 69. He’s been under par in 15 of his 19 rounds on the Plantation Course. And really, the guy just seems to love Hawaii. He parlayed his 2017 Tournament of Champions win into a first-round 59 the following week at the Sony Open, where he also took the title.

On Saturday, Thomas again looked ready to run away with the lead and hide from the field. He raced out to a 5-under start through nine holes to reach 11 under, but could push no further. A back-nine 38 and a bogey-par finish left him to sign for a 4-under 69.

Had Thomas done that, this event would likely already be wrapped. Instead, a whopping nine players – Thomas, Gary Woodland (8 under), Kevin Kisner, Jon Rahm, Collin Morikawa, J.T. Poston, Matthew Wolff, Joaquin Niemann and Patrick Reed (all 7 under) – are within four shots of the lead held by Schauffele.

It’s an all-star chase pack of proven winners, any of whom could do what Schauffele did last year. But given their track records on this golf course, it’s easy to imagine a Schauffele-Thomas duel down the back nine.

With limited professional experience playing from ahead, and with high winds yet again expected, Schauffele insisted late Saturday that he’ll approach the Plantation Course the same way he has the last three days. He won’t force what isn’t there.

“I think it’s something all pros learn. There’s a time when you can force it,” he explained. “One of the best forcers was probably Tiger in his prime. He could force an outcome if he needed it.

“I haven’t really learned how to play great forceful golf. I sort of go with the flow, and if I handle my game properly, not too many mistakes should be made.”