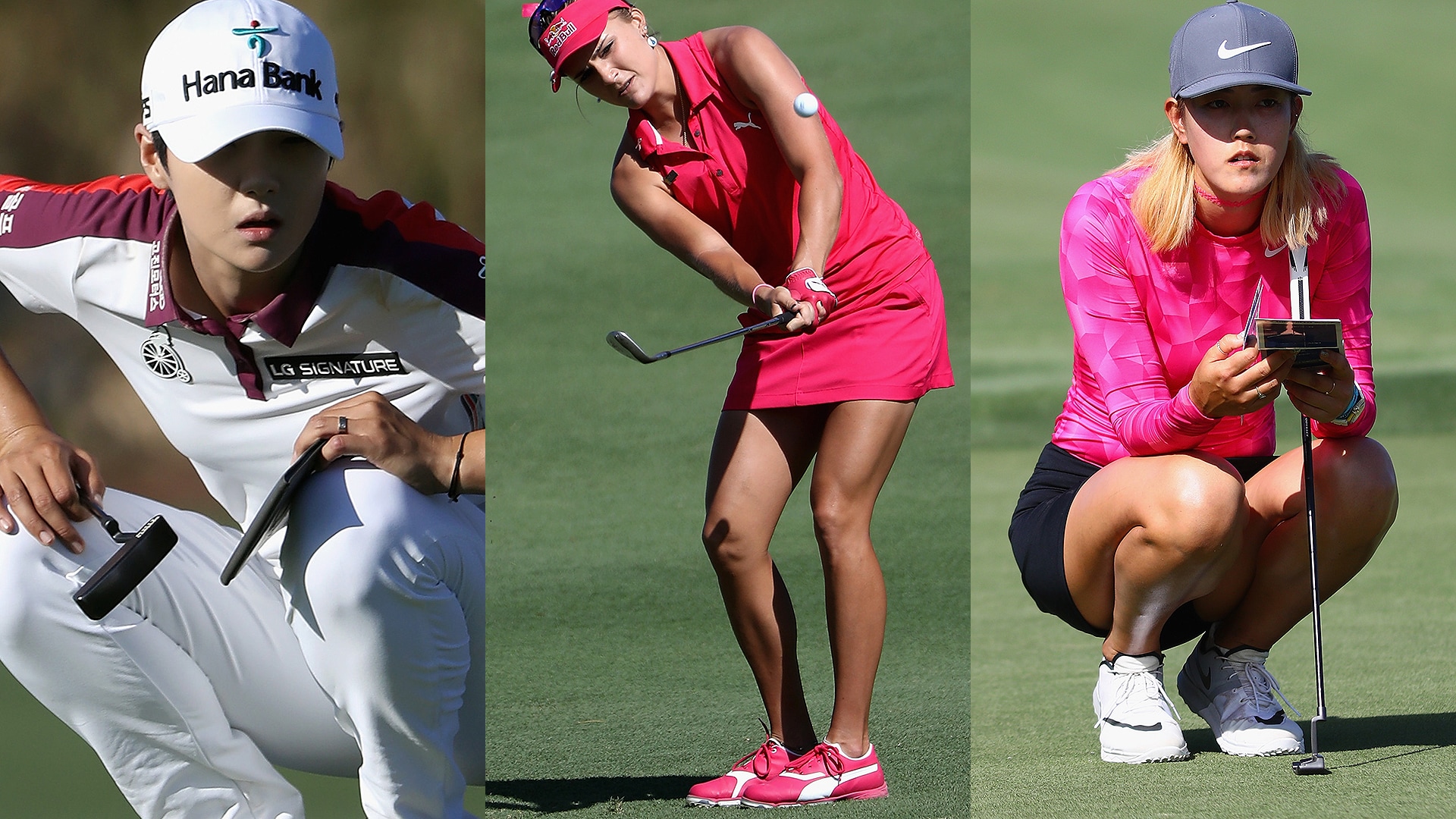 She left with bloody fingernails after a brutal day failing to cling to her spot atop the leaderboard.

OK, they weren’t really bloody, but even the unflappable Park wasn’t immune to mounting pressure, with the Rolex world No. 1 ranking, the Rolex Player of the Year Award, the Vare Trophy for low scoring average, the CME Globe’s $1 million jackpot and the money-winning title among the prizes she knew were within reach when she teed it up.

“It’s honestly some of the worst pressure,” Stacy Lewis said of CME week. “It’s so much pressure.  It’s just really hard to free yourself up and play golf.”

Lewis isn’t in the mix for all those prizes this year, but the two-time Rolex Player of the Year and two-time Vare Trophy winner knows what the full weight of this week’s possibilities bring.

“It’s almost nice to come here without all that pressure, but you want to be in that situation,” Lewis said. “It’s just really tough.”

Park is no longer in charge at Tiburon.

This championship is wide, wide open with a four-way tie for first place and 18 players within two shots of the lead.

Park is one shot back after stumbling to a 3-over-par 75.

Count Michelle Wie among the four tied for the lead after charging with a 66.

Former world No. 1 Ariya Jutanugarn (67), Suzann Pettersen (69) and Kim Kaufman (64) are also atop the leaderboard.

Kaufman was the story of the day, getting herself in contention with a sizzling round just two weeks after being diagnosed with mononucleosis.

Park is in a seven-way tie for fifth place just one shot back.

Lexi Thompson (69) is in that mix a shot back, as is Lewis (67), who is seeking to add a second title this year to her emotional win for Houston hurricane relief.

For Wie, winning the tournament will be reward enough, given how her strong rebound this year seemed derailed in September by an emergency appendectomy. She was out for six weeks.

Before the surgery, Wie fought her way back from two of the most disappointing years of her career, with six finishes of T-4 or better this season. She returned to the tour on the Asian swing in October.

“I gained a lot of confidence this year,” Wie said. “I had a really tough year last year, the last couple years. Just really feeling like my old self. Really feeling comfortable out there and having fun. That’s when I play my best.”

All the subplots make Sunday so much more complicated for Park and Thompson, who are best positioned for a giant haul of hardware.

They have the most to gain in the final round.

Park has already clinched the Rolex Rookie of the Year Award, but she can add the Rolex Player of the Year title, joining Nancy Lopez as the only players in LPGA history to win both those awards in the same season. Lopez did it in 1978.

A fifth place finish or better could give Park the Player of the Year Award outright, depending what others do.

“There are a lot of top players right now at the top of the leaderboard,” Park said. “Keeping my focus will be key.”

Like Park, Thompson is trying not to think about it all of that.

“I treat every tournament the same,” Thompson said. “I go into it wanting to win. I’m not really thinking about anything else.”

The Vare Trophy for low scoring average is Thompson’s to lose.

Park has to finish nine shots ahead of Thompson on Sunday to have a shot at the trophy, and they are tied at 9-under overall.

The money-winning title is Park’s to lose. So Yeon Ryu has to win the tournament Sunday to have a chance to wrestle the title from Park, but Ryu has to pass 31 players to do so.

The CME Globe’s $1 million jackpot remains more up for grabs, with Thompson and Park best positioned to win it, though Jutanugarn is poised to pounce if both stumble. A lot is still possible in the race for the jackpot.

The pressure will be turned way up on the first tee Sunday.

“There is always that little bit of adrenaline,” Thompson said. “You just have to tame it and control it.”