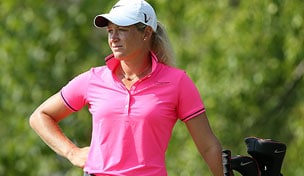 Getty Images
ORLANDO, FL - MARCH 23: Arjun Atwal of India and the Isleworth Team watches his tee shot on the 3rd hole during the second day's play in the 2010 Tavistock Cup, at the Isleworth Golf and Country Club on March 23, 2010 in Orlando, Florida. (Photo by David Cannon/Getty Images)  -

Paula Creamer and her caddie, Colin Cann, sustained minor injuries in a car accident Sunday night when they found themselves in the middle of a five-car pileup on their way to the Bangkok airport after the Honda LPGA Thailand event.

“I was in the middle car and felt like a ping pong ball,” Creamer tweeted Monday morning.

Ai Miyazato also was in a car in the pileup, while Suzann Pettersen and her mother were in a car that narrowly missed the accident.

In a blog post on her website (pictures included), Pettersen wrote that they were driving “pretty fast” and “maybe to ruff (sic)” before the accident. Pettersen was riding in the last car, she wrote, and managed to avoid the pileup.

Creamer was in the front seat of a VIP car, and though she was wearing a seatbelt, she said her air bag did not deploy. She and Miyazato visited a hospital in Singapore after their flight landed for this week’s HSBC Champions. Creamer said doctors told her she did not suffer a concussion, but she did suffer moderate whiplash and has a sore shoulder.

Creamer reported Cann, who was in the back seat, has a sore neck and shoulders.

“I will probably be sore for several weeks,” Creamer tweeted. “We were very lucky. Hope to be able to play this week.”

“With great concern for the players, caddies and families involved, we’ve been working through the necessary channels to gather available and accurate information beyond the original wire report … although follow up information trickled in slowly as players traveled from Thailand to Singapore. At this point, we’ve now been in contact with each of the players involved and their representatives. We’re glad to report that there are no serious injuries. Paula and Ai have been seen by doctors, x-rays have checked out ok, and each is receiving excellent follow up care. All players say they are hopeful of competing this week at the HSBC Women’s Champions in Singapore. We will update as necessary.”