Teaching pros across country adjusting to life away from the range 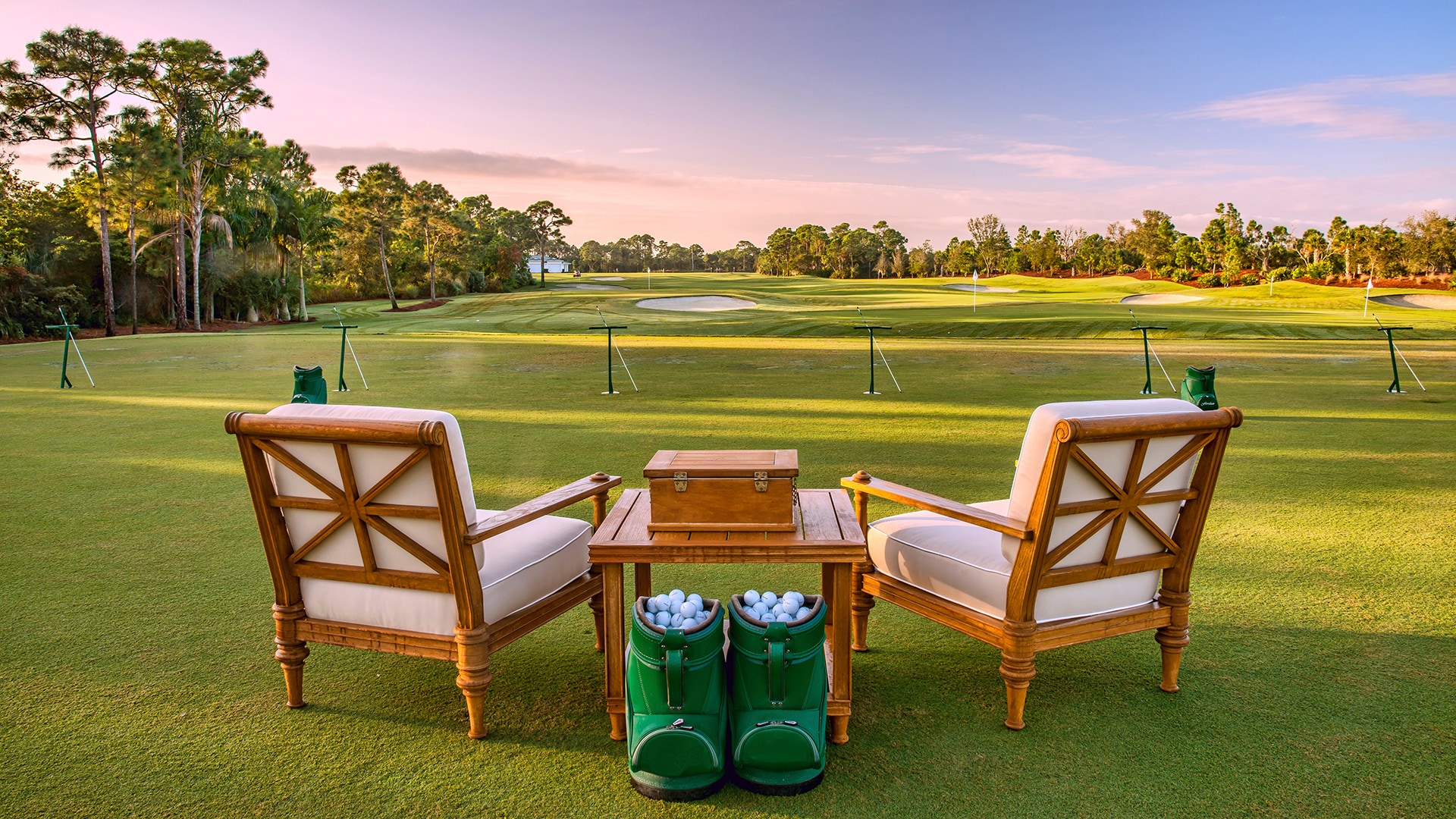 Bobby Saavedra struggled over how long to continue teaching with the coronavirus pandemic spreading.

Even adhering to 6 feet of social distance on the practice range at Fred Enke Golf Course in Tucson, Arizona, a city-owned facility, he was emotionally torn.

Not only are golf courses open in Tucson, they’re actually bustling.

“The course is getting busier now,” Saavedra said.

He found himself uncomfortably in the middle of the larger medical/ethical/economic drama playing out in the country amid the pandemic. How do you safely balance health and economic needs? It isn’t just a national policy being debated. It’s a personal quandary for so many.

With bars and restaurants closing down in Tucson, with other limited restrictions, golf is still a permitted escape there, a comforting recreational option, with courses taking precautions to make it as safe as possible to play.

“The coronavirus hasn’t been as bad in Arizona, but nobody’s taking it lightly,” Saavedra said. “There’s kind of a weird vibe here, a sad undertone. I think people are waiting to see if it’s going to get like it is in New York.

“But right now, I think we have people who just want to see and talk to other human beings in a safe space.”

So, while Saavedra has been surprisingly busy this past week, teaching from a safe distance, not touching his students, he was growing increasingly uncomfortable, with the COVID-19 threat growing in other parts of the country.

“I’m usually very social, welcoming new people to the course, introducing myself and getting to know players, handing out my card,” Saavedra said. “But I’m not handing out any cards now. I’m not doing any of that. There’s just a real awkwardness approaching people right now, especially people you don’t know.” 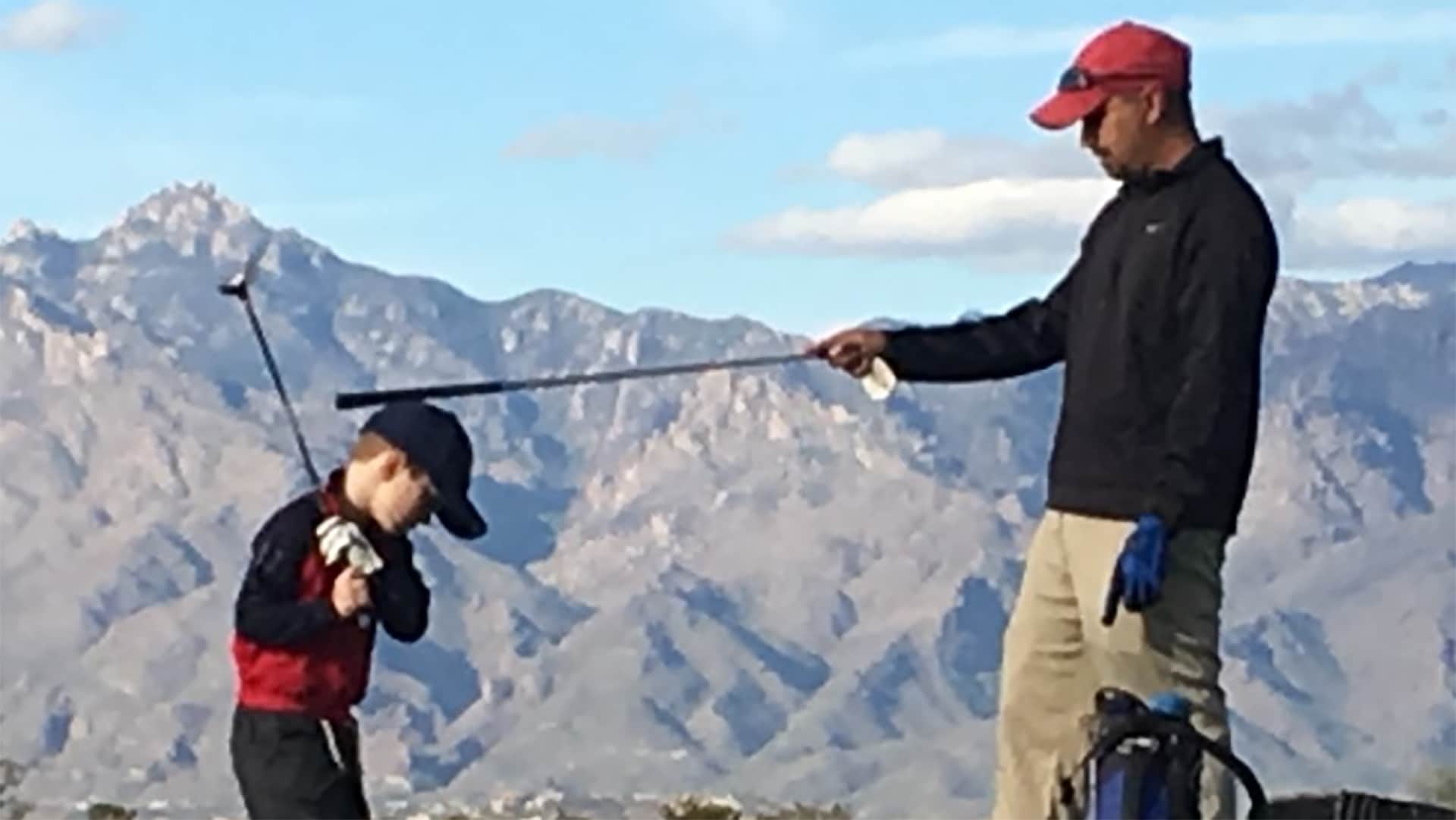 Saavedra, 37, is an independent contractor who has an agreement with the city to teach on the range, but he informed the course’s general manager on Thursday that he is halting all of his lessons.

Saavedra helps take care of his 64-year-old mother, who was involved in an accident a few years ago. She lives with him.

“Even being as careful as I am on the range, I don’t want to bring anything home,” he said. “I don’t want to put my mom at risk. I talked to her about it, and I think it’s the best thing, to keep her safe.”

Like so many other golf instructors who are independent contractors, Saavedra doesn’t get a salary. Financially, he depends on the $70-per-hour teaching rate he gets from his students. There’s uncertainty now in not knowing how bad the virus may get in Arizona, or how long it may keep him from making a living that both he and his mother depend upon.

“I’ve been saving and trying to be smart,” Saavedra said. “I can probably weather this for a few months, but I’m hearing it might last through August. If that’s the case, I couldn’t weather that.”

Saavedra has friends who are among the wave of new unemployment filings. He said he is hearing that banks may be making provisions to help homeowners with their mortgages. He hopes so.

As a kid, Saavedra didn’t play golf. He was a musician, a guitar player. He was part of a local band, but he took up golf in his early 20s and was smitten. Four years after he started playing, he had his PGA of America certification. Last year, he was named the Arizona Southwest PGA Chapter’s Teacher of the Year.

Saavedra knows he has been fortunate teaching at all this month. Many of his PGA brethren have been shut down.

With California one of the coronavirus hotspots, a lot of golf courses are closing, as counties institute sweeping business and social restrictions.

Bob Lasken saw both of the courses he teaches at in Orange County, California, shut down over the last week. First, Big Canyon Country Club in Newport Beach announced it was shutting down, then Arroyo Trabuco in Mission Viejo followed.

“Business has pretty much skidded to a halt,” Lasken said.

His students range from tour pros like the LPGA’s Angel Yin and Lee Lopez to high handicappers and juniors.

“My schedule is normally pretty much full seven days a week,” Lasken said. 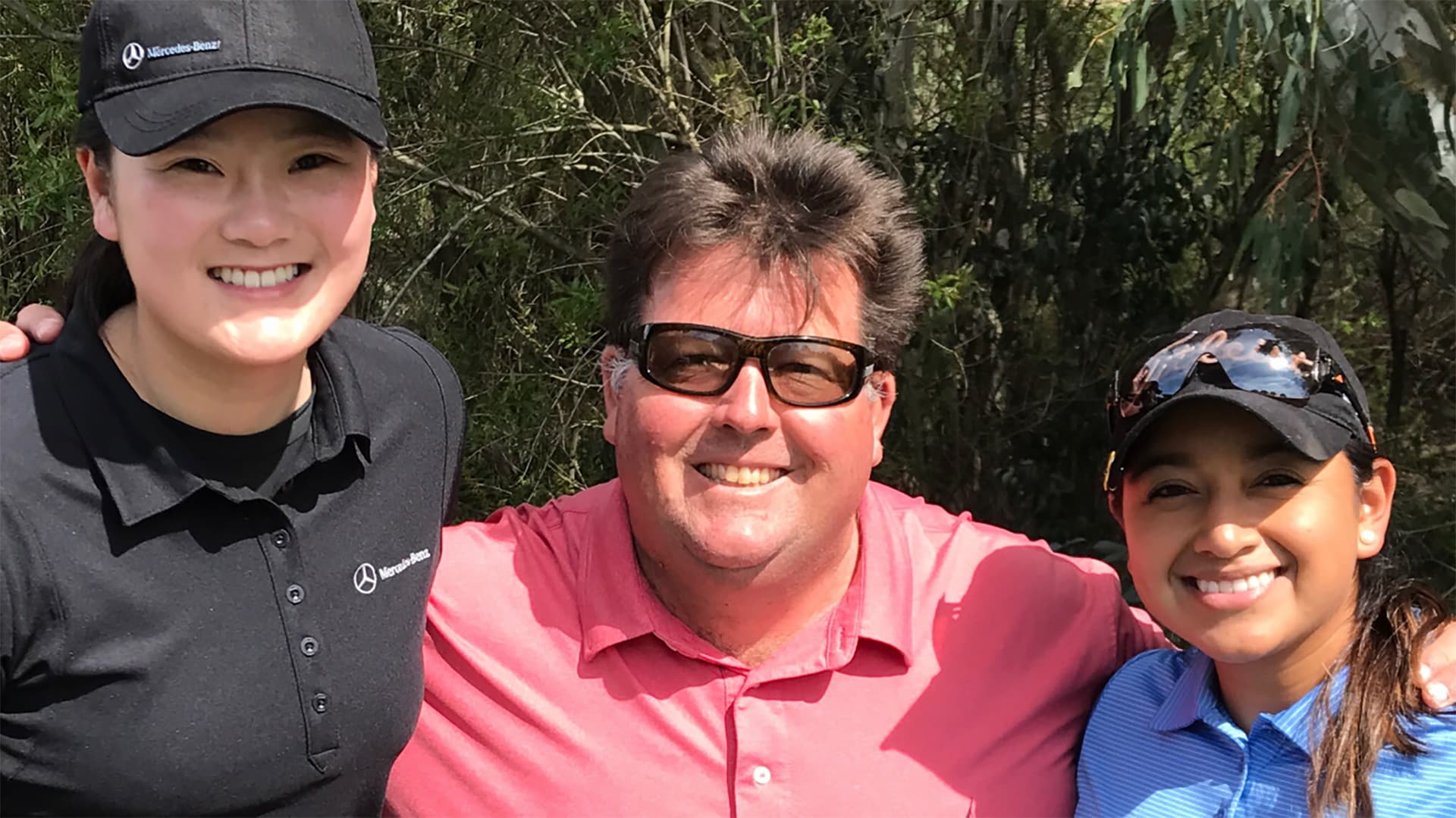 All of a sudden, he’s at home in San Juan Capistrano, getting a lot of quality time with his wife and four kids, their two dogs and neighbors he toasts from their respective driveways in a new 5 p.m. socially-distanced community happy hour.

Lasken said he wasn’t originally sure how serious the coronavirus threat would become in the United States, but the danger escalated to a personal level when one of his students called to cancel a lesson.

“He got the virus,” Lasken said. “He’s a super healthy guy, in his late 40s, and he said he almost died from it. He had a fever, chills, a cough and couldn’t breathe. He said an inhaler saved his life. That really put this in perspective.”

Lasken is feeling fine. It had been a while since he saw the student. He’s keeping his lessons going via online video services.

“I’m doing some of that,” Lasken said. “I have students who have nets at home, who are sending me videos of their swings. I have other students who are telling me they’re going to get nets, so they can keep working on their games.”

Video lessons will help Lasken keep his work going with students, but it’s nothing like being on the range with them. His livelihood depends on the game coming back.

“You have a rainy-day fund,” Lasken said. “But if this bypasses that, it’s going to hurt.”

Gavin Coles, an Orlando-based instructor and former PGA Tour pro, hasn’t given a lesson in two weeks. He isn’t alone among independent contractors in Central Florida.

“Basically, we’re all unemployed,” Coles said. “We aren’t an essential service right now, but that’s the way it should be. Nobody wants to get sick.”

Orange County, where Coles resides, was slated to begin its mandatory stay-at-home order Thursday at 11 p.m. ET, with all non-essential businesses closed. The order even prohibits residents from visiting friends and family, if there is no urgent need. 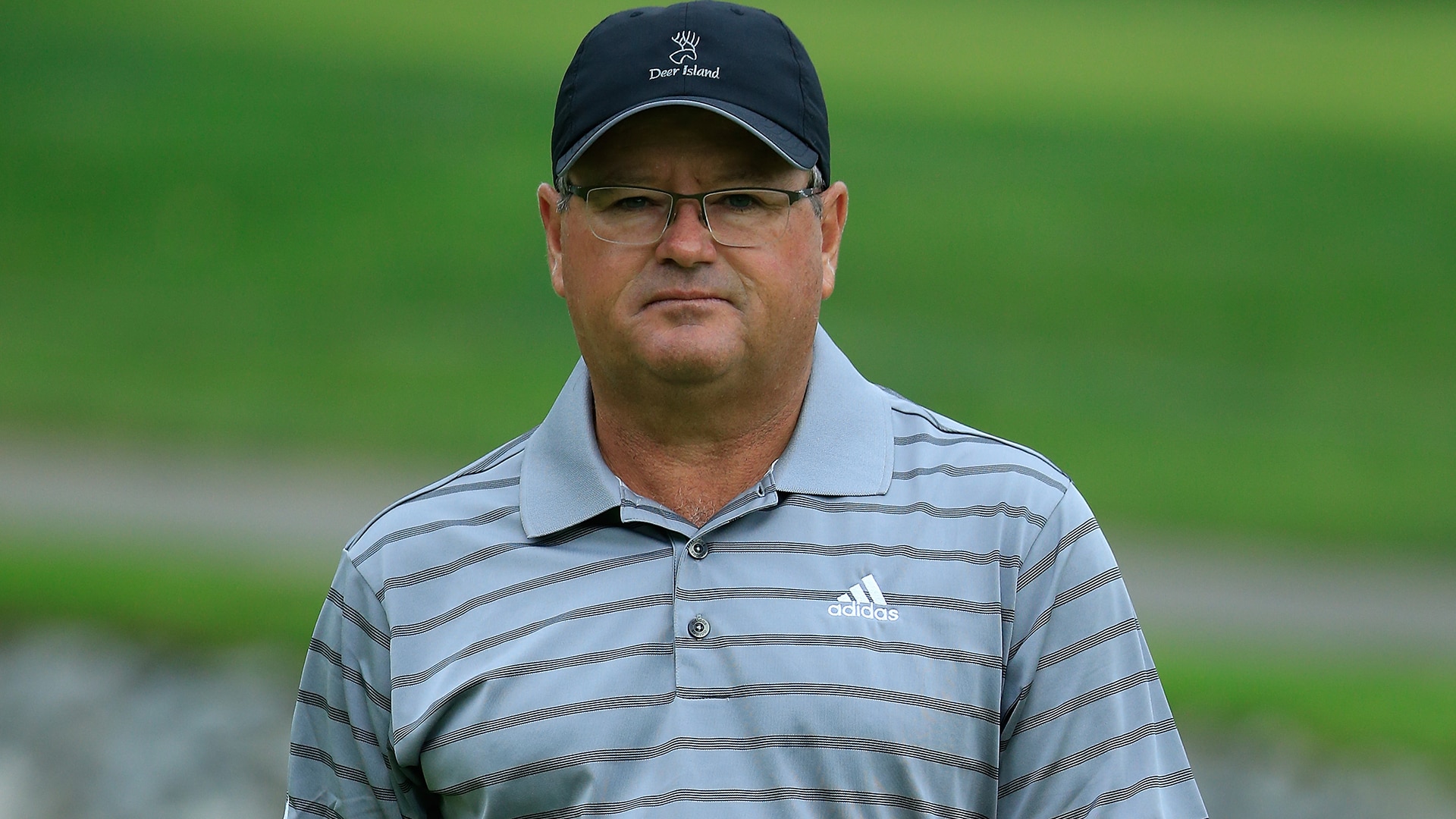 Coles, 51, played the game at the highest level, but he knows grassroots teachers do the most to build the game with everyday players. And those grassroots folks will be hurt the most by a lingering work stoppage.

“It’s already hurting them,” Coles said. “It’s going to hurt a lot of professionals who don’t have unlimited resources, who can’t take two months off.

“And we’re not going to be back to normal by April. There’s no chance, if you look at what other countries are dealing with.”

In Atlanta, Pete Jones is counting his blessings with his inability to teach after his club shut down two weeks ago. He is the director of instruction at Cherokee Town and Country Club, with a staff of three other instructors under him. The club shut down as a preventive measure.

While Jones has a base salary at the club, he and his staff also earn a percentage of their pay from lessons, as is the case at most clubs.

“We’re very fortunate as our club is stepping up and taking care of its employees,” Jones said. “Right now, they have our backs. They’re paying us based on what we would normally make, including lessons.”

That means Jones hasn’t been feeling as much angst as he might otherwise while out of work. He has been at home with his wife and 2-year-old son since the course closed.

“I know other professionals at smaller clubs that are less financially stable who aren’t making any money right now,” Jones said. “

Jones said the club is beginning to roll out instruction videos to keep members engaged.

In Los Angeles, John Ray Leary runs an academy at Angeles National Golf Club. The range was closed down 12 days ago because of the pandemic. He’s getting creative trying to fill the void of lost lessons and clinics. He’s releasing online video lessons, teaming with competing instructors to give clinics.

Sixty people logged in for one of his clinics on Tuesday. He’s doing live clinics on Instagram every day, at @Leary_Golf.

They’re free clinics and chats about the swing and game.

“I got into the business to help people,” Leary said. “And, selfishly, doing this keeps me sharp during our break.”

Leary says money can be made doing private lessons via FaceTime, but he said it is typically supplemental income.

For Leary, going online is mostly about staying connected to his students and feeding the game to players hungry to keep on learning during this down time.

“We don’t know when we will be open for business again,” he said.

That’s the uncertainty continuing to hang over more than golf.