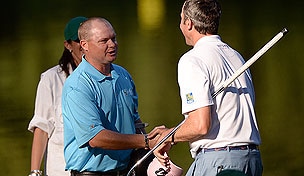 No player has ever won the Par 3 Contest and gone on to win that week’s Masters, yet despite the looming jinx both players posted 4-under-par totals and returned to the layout for a late afternoon playoff with Ted Potter Jr.

“(Mickelson) has been talking about breaking the jinx for years,” said Mickelson’s wife, Amy, while fans waited for the bonus play.

Potter and Kuchar, who hit his tee shot on the first extra hole (the 120-yard eighth) to 2 feet, traded birdies on the first overtime hole and Mickelson was eliminated with a par. Potter birdied the second extra hole (No. 9) to win.

It appeared Bo Van Pelt would claim the Par 3 crystal, but he allowed his daughter, Olivia, to play the last hole and was disqualified; while Nick Watney, who made an ace at the 135-yard ninth hole, and Ernie Els also finished at 4 under but did not show up for the playoff.

“Kip (Henley), Brian’s (Gay) caddie was like, come on, somebody’s got to break it,” Van Pelt said. “I wasn’t thinking about it too much.”

This was the 19th time since 1960 the Par 3 was decided in a playoff. Last year Padraig Harrington and Jonathan Byrd shared the title after finishing tied at 5 under.

Two-time Masters champion Ben Crenshaw recorded the day’s only other ace at the 115-yard seventh hole.