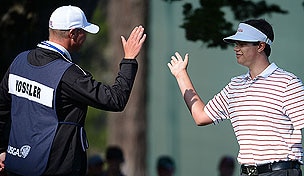 Getty Images
DUBAI, UNITED ARAB EMIRATES - NOVEMBER 19: Lee Westwood of England tees off on the 18th hole during the first round of the Dubai World Championship on the Earth Course, Jumeirah Golf Estates on November 19, 2009 in Dubai, United Arab Emirates. (Photo by Andrew Redington/Getty Images)  -

They must have heard the roar from the Embarcadero to Lombard Street to the Golden Gate Bridge when the 17-year-old Californian flashed a mouth full of braces as he walked off the first hole (his 11th of the day).

That is where Hossler made birdie to overtake Tiger Woods for sole possession of the lead.

Hossler’s parents marveled at their boy’s improbable march into contention, but not for the reasons you might think.

It wasn’t in seeing his name over Woods on the leaderboard.

It wasn’t in seeing shot making beyond his years.

No, they marveled at their boy’s unshakably cool demeanor all the way around this course.

“I’m a nervous wreck,” Beau Sr. said waiting for his son outside the locker room after the round. “Beau’s always had this calm about him. I’ve said this for a long time. He has an ability to stay calm in situations where other people aren’t very calm.”

“I was nervous when Beau was on the first tee box, but he looked so relaxed and calm, it calmed me down,” said Amy, who walked the course with her husband, Matt, Beau’s stepfather. “Beau was so comfortable, and that made me comfortable.”

Neither Amy nor Beau Sr. will take credit for their son’s cool demeanor.

Beau needed that demeanor amid some adversity late in his round. He ended up shooting 3-over-par 73, leaving him four shots off the lead. He stumbled home with a double bogey at his 14th hole (No. 4), and then proceeded to drill his next tee shot to the right and squarely off a tree. The ball ricocheted backward, into a bunker up on the wrong fairway alongside No. 4. He seemed to be a mile from the hole, with a small forest of trees between him and the green.

Hossler’s caddie, Bill Schellenberg, who also is his godfather, tried to hand him a wedge to pitch the ball sideways back into the fairway. Beau, instead, plucked out his 6-iron and aimed straight over the stand of giant trees. He hit a towering rocket out of that bunker, flying the trees and finding the fairway a little wedge away from the green.

Beau would make bogey there, but the towering escape won’t soon be forgotten.

Evidence that Beau isn’t overwhelmed in this setting came through in one of his practice rounds. He arranged a round with Phil Mickelson, his favorite player.

Hossler outplayed his idol through the first two official rounds, finishing Friday four shots ahead of the four-time major champion.

Chants of “Beau” and “Hoss” echoed across Olympic Club all afternoon.

“It was pretty special,” Beau said.