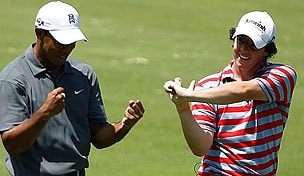 Nostradamus offered no meaningful help in trying to see what may unfold in the 2013 golf season.

He didn’t even foresee the upheaval the proposed banning of anchored putters would cause this year.

Jeane Dixon didn’t offer any help, either. She failed to predict the monumental change at Augusta National this year with the club inviting its first two women as members.

The Mayans were also no help forecasting the season ahead, but, of course, they didn’t think there would even be a season.

So here’s one attempt to look ahead, not so much as prophecy, but as hopeful wishing for some over-the-top storylines to mesmerize us yet again this year. Here are 10 dreamy stories that would intrigue if they were actually to unfold in the new year:

Monty aims to be the real Great Scot

In a surprising but strategically bold maneuver aimed to counter the Americans naming Tom Watson as the U.S. Ryder Cup captain, the European Tour announced that Colin Montgomerie will return as the Euro captain when the competition is played at Gleneagles in Scotland in 2014. Watson won four of his five British Opens in Scotland. Montgomerie, born in Glasgow, is one of Europe’s most decorated Ryder Cup stars and captained the Euros to a victory in Wales in 2010.

Phil Mickelson won the Northern Trust Open at Riviera Country Club, completing the California Slam. Mickelson’s victory was his fourth in four starts with Lefty winning every California PGA Tour stop on this year’s West Coast swing. He won the Humana Challenge, the Farmers Insurance Open and the AT&T Pebble Beach National Pro-Am before claiming the title at Riviera.

One from the heart: Compton wins at Doral

Erik Compton, golf’s only real miracle man, won his hometown event, claiming the WGC-Cadillac Championship at Doral. The two-time heart transplant recipient, who qualified for the WGC event piling up FedEx Cup points with a hot run on the West Coast, was the No. 1 junior growing up in Miami. His triumph was celebrated as the most emotional in tournament history since Ray Floyd won at Doral after his Miami home burned down.

Wie finds her oasis in the desert

Michelle Wie, coming off the most difficult season of her highly scrutinized career, delivered a message heard 'round the world in women’s golf by winning the Kraft Nabisco Championship. Wie, the former child prodigy whose future seemed uncertain with her slump in 2012, broke through to win her first major in the most watched telecast in the history of women’s golf.

Rory McIlroy birdied the 72nd hole to defeat Tiger Woods by one shot at The Masters. McIlroy and Woods traded a flurry of titanic golf blows on Augusta National’s back nine that will go down as a duel for the ages. Winning a spirited game of one-upsmanship shot making, McIlroy claimed his second consecutive major by outlasting Woods in the final pairing together. The victory gives McIlroy three legs of the career grand slam before his 24th birthday.

Lexi Thompson won the Wegmans LPGA Championship to become the youngest winner of a major championship in the history of women’s golf. Thompson was 18 years, 3 months and 29 days old when she claimed the title at Locust Hill.

The master schools the boy king: Woods takes down McIlroy at Merion

Tiger Woods defeated Rory McIlroy to win the U.S. Open by a single shot after their 18-hole Monday playoff at Merion was extended an extra hole. Two months after losing a heart-wrenching duel with McIlroy at Augusta National, Woods answered back, claiming his 15th major championship, his first in five years. Woods moved to within three of equaling Jack Nicklaus’ record of 18 major championship titles.

Yani Tseng, rebounding from a second-half slump in the 2012 season, won the U.S. Women’s Open at Sebonack to complete the career grand slam in women’s golf, sort of. With the Evian Masters becoming a major in September, there will soon be a fifth leg to the career grand slam in the women’s game. Nevertheless, Tseng’s triumph is notable because the U.S. Women’s Open had been her most elusive prize.

Luke Donald’s no longer the best player without a major championship title. Dogged by questions as to whether he was worthy of a No. 1 ranking without having won a major championship, Donald unburdened himself, winning the British Open at Muirfield. He becomes the first Englishman to win the British Open since Nick Faldo won at Muirfield 21 years ago.

A month after Donald broke through to win his first major, fellow Englishman Lee Westwood did the same, winning the PGA Championship at Oak Hill. Like Donald, Westwood was plagued with questions as to whether he was the best player without a major championship. At 40, he will endure the speculation no more.