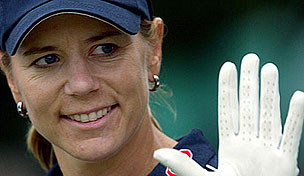 Annika Sorenstam’s missed cut at Colonial remains the defining moment of her career.

That’s because of the profound way the experience redefined her and the way she will be remembered.

Looking back this week on the 10th anniversary of her PGA Tour appearance at Colonial, Sorenstam is still moved at how those two rounds in Fort Worth, Texas, did more to shape her game and how she carried herself than any of the 72 LPGA titles and 10 major championships she won.

“It was a turning point for me,” Sorenstam told GolfChannel.com. “It’s one of the highlights of my career.”

When she makes public appearances today, Sorenstam, 42, is asked more about missing the cut at Colonial than any other aspect of her Hall of Fame career.

“Ten years later, I still hear new stories surfacing from people who drove from everywhere to be a part of it, who say they were inspired by it,” Sorenstam said. “I hear from parents with daughters who say it really showed them that if they have a dream, they need to follow it. I think people connected with it because they could see themselves, that if they wanted to achieve something, they have to face their fears and take the opportunities that are there for them.”

In that respect, even as a missed cut, it was a conquest, but not in the way you might think.

It was never Sorenstam’s ambition to conquer the men’s game. This was all about conquering fear, pressure, doubt and all the other obstacles that stood in the way of taking her game to greater heights.

Sorenstam says it was about climbing beyond what she dreamed possible.

“It was a time of my life where I was No. 1 for a while, and I was looking for ways to get better because I knew inside I could get better,” Sorenstam said. “I wanted a little extra spark to get me there.”

So, at 32, Sorenstam accepted a sponsor exemption to play the event at Colonial Country Club, the course known as Hogan’s Alley. The decision didn’t come without risk. She would, after all, become the first woman in six decades to tee it up in a PGA Tour event, the first since Babe Didrikson Zaharias played in the Tucson Open in 1945. Predictably, a small furor followed Sorenstam’s decision to play. There was backlash over the idea that a woman was competing against men.

Singh did withdraw, even though he wasn’t paired with Sorenstam. Defending champ Nick Price called Sorenstam’s appearance a publicity stunt. Even some of Sorenstam’s LPGA colleagues questioned the wisdom of playing.

“Her quest puts the LPGA in a tough spot,” American tour pro Angela Stanford wrote in a first-person piece in Sports Illustrated at the time. “We have more to lose as an organization than Annika has to gain as an individual.”

Stanford was right. If Sorenstam flopped, it would be a black eye for the entire women’s game.

Click here or on picture above for photos of Sorenstam at Colonial in 2003.

Looking back today, Sorenstam said she expected some push-back.

“It didn’t faze me a bit,” Sorenstam said. “This was a very unusual situation. It was something no other woman had done in 58 years. I think when there is something new, some people will embrace it, some people will question it, and that’s what happened with some of the players. I wasn’t worried about that.”

Tiger Woods, who occasionally practiced with Sorenstam when they both lived in Orlando, was impressed at the way she handled herself under the kind of scrutiny few players outside Woods experience.

“She was playing so well at the time,” Woods said. “She was winning everything. Her confidence was high, and I thought what she was doing for the sport of golf and for women was absolutely incredible. It took a lot of courage to do that, and to put herself out there on the limb like that, and put herself out there in front of the world to critique, criticize and anything in between. She did it, and she played fantastic.”

Back in Sweden, where Sorenstam grew up, a 16-year-old girl named Anna Nordqvist was riveted watching the Colonial. Nordqvist was still relatively new to the game, having picked up a golf club only three years earlier.

“It was a huge deal,” said Nordqvist, a two-time LPGA winner. “Growing up in Sweden, we didn’t get to see many tournaments on TV, but I remember watching Annika hit her first tee shot and thinking, `Wow, a female athlete from Sweden is conquering the world, dominating the women’s game and playing against the men.’ She was a huge inspiration for me.”

For young women around the world, too.

“I remember thinking how really cool it was,” said Brittany Lincicome, a five-time LPGA winner who also was 16 when she watched Sorenstam play Colonial. “I idolized Annika, and she was inspiring to watch. To have the courage to compete against the men spoke volumes about what a great athlete she was.”

Aaron Barber and Dean Wilson, a pair of PGA Tour rookies, were randomly paired with Sorenstam at Colonial by a computer.

Sorenstam said Barber and Wilson became like brothers to her in those two days. They could still feel the bond when they were recently reunited at Colonial to film a Golf Channel special commemorating the 10-year anniversary. “Go Annika” will air Wednesday at 9 p.m. ET.

“Everything was so misunderstood right away,” Barber said. “It wasn’t a publicity stunt. I think the people who didn’t rush to judgment and stood back and listened to what she was saying, they understood she was playing for the right reasons. She was just so much better than everyone else in the women’s game, and she just wanted to challenge herself, test herself.”

Barber knew there was no baloney to her stated purpose after she birdied the fourth hole in the first round they played together. She was 1 under and actually on the leaderboard. Barber told her he believed she could compete on the PGA Tour.

“She said, `No, no, no, there’s no chance I’ll play more, no matter what happens this week,’” Barber said. “She said she totally underestimated the kind of circus it would be. When you heard her say that, you knew she wasn’t doing it for the publicity.”

But there was so much publicity.

Sorenstam’s popularity soared. She would make appearances on 'The Tonight Show' with Jay Leno, NBC’s 'Today Show' and CBS’ '60 Minutes.' She was in People magazine and threw out the first pitch at a Mets game.

Barber said the publicity was good for him, too. As soon as word hit that he was going to be paired with Sorenstam, Barber picked up a hat, shirt and bag endorsement deal.

“When we met, Annika apologized for bringing us into this,” Barber said. “I told her she shouldn’t feel sorry for me. I made more money in endorsements because of that pairing than I made the rest of my career.”

Barber played one more year on the PGA Tour after being paired with Sorenstam. Today, he’s a financial planner for Ascend Advisory Group. He’s married with three children ages 10, 6 and 3. Wilson lost his PGA Tour and Web.com Tour status but is still working to make his way back.

Sorenstam shot 71 and 74 at Colonial and missed the cut by four shots, but she made it interesting. She got herself on the cut line in the second round before her putter started failing her on her final nine. She tied for 96th, besting 11 men.

Looking back, Sorenstam has more vivid memories of how the tournament began than how it ended. She will never forget the circus that greeted her before her first tee shot (No. 10) in the first round at Colonial.

USA Network went on the air at the crack of dawn to televise her round. Media from around the world were there to document it. Record crowds poured onto Colonial’s grounds.

“I remember all the people,” Sorenstam said. “Rows and rows and rows of people. There were people hanging in the trees, and there were so many cameras.”

And more pressure than Sorenstam ever felt before.

“I knew I was going to give it my best, but I was nervous I might not get my ball on the tee,” Sorenstam said. “I was shaking.”

Waiting to play, Sorenstam turned to her caddie at the time, Terry McNamara, confiding just how nervous she was.

“I have never felt like this,” she told him. “I don’t know what I’ve gotten myself into.”

Moments later, she was striping her first tee shot straight down the middle.

“I can still see it,” Sorenstam said. “There was so much adrenalin, I hit it a mile all week.”

Walking off that first tee, Sorenstam playfully let herself go for a moment, intentionally acting as if her knees were buckling with nerves. The galleries in golf had never seen Sorenstam letting go like that before. They loved it. They loved her all week.

That wasn’t lost on Hall of Famer Nancy Lopez, who watched on TV. She still remembers Sorenstam’s wobbly walk and smile off the first tee. Lopez saw it as the beginning of a transformation of Sorenstam’s persona.

Shy and almost ruthlessly cold as a competitor, Sorenstam was different at Colonial. She opened herself to fans in a way that she never did before. They embraced her, and she embraced them back.

“Before Annika went to Colonial, she didn’t have the same connection with the fans that she had after Colonial,” Lopez said. “I think a lot of players believe they can’t let go of the moment when they’re playing, that they have to stay focused for 4 1/2 hours. I think Annika was like that, but at Colonial, when she hit that first shot, the crowd reacted to her, and she reacted back.

“And then when she got to the next shot, she was able to concentrate and focus. She saw she didn’t have to be focused every moment on the course. I think she left Colonial with a different attitude.”

Sorenstam left feeling more confident opening herself to the public.

But after Colonial, Sorenstam became more comfortable letting people see who she was.

She also felt a resolve she never felt so fully before.

After leaving Colonial, Sorenstam won 23 times in 30 months. As a player, she was stronger, and as a personality, she was never more fully developed and sure of herself.

“I talk about the event when I do public speaking,” Sorenstam said. “I talk about how we all come to crossroads in our lives. It might be a career-changing path, or marriage plans, or some difficult medical decision. Whatever it is, it’s easy to fear something will go wrong, but you have to look at the positives and forge ahead. What happened at Colonial made me stronger.”

In that regard, missing the cut didn’t ultimately matter. Sorenstam walked away with what she really wanted in the experience. She left Colonial with immeasurable strength gained.