'There was no other option': During golf hiatus Erik Barnes takes Publix job to provide for family 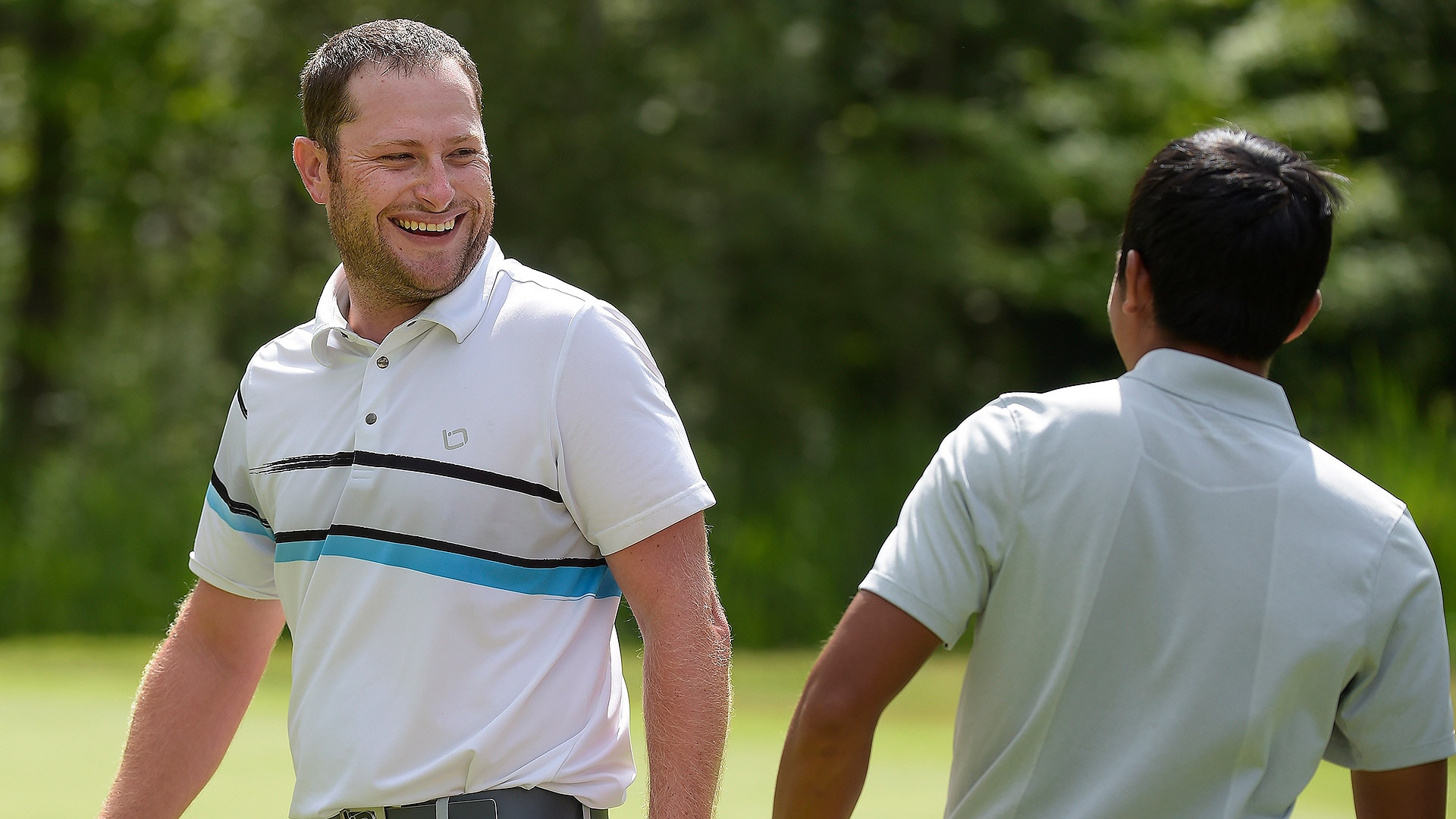 The 32-year-old is used to grinding out birdies and pars on the Korn Ferry Tour, stringing together results in hopes of improving his status. But as the golf world continues to grapple with fallout from the COVID-19 pandemic on a macro scale, Barnes’ focus has been on the dollars and cents of his family of four. That reality led to what he admits would have been an unimaginable scenario even a few months ago: rising well before the sun to go stock shelves at his neighborhood grocery store.

“I’ve met some really good people. I’ve probably made a couple friends that I’ll have for a long time,” Barnes said. “But I want this part of my journey to end as soon as possible.”

For the last six weeks, Barnes’ typical routine has started with a 3 a.m. alarm. He’s out of bed and reporting for duty at a Publix just a couple hundred yards from his Palmetto, Florida, home by 4 a.m. There he’ll spend nine hours replenishing items and arranging produce before clocking out at 1 p.m.

“After that, I’m basically a slug for a couple hours,” he said. “Then generally by around 3 or 3:30 I muster up the energy to get out to the golf course.”

That’s when the second phase of Barnes’ day begins. He lives just off the 10th fairway at Moccasin Wallow Golf Club, where he’s got his own cart and “the run of the place” from an understanding course operator. He’ll usually practice until dark or close to it, racing home for dinner with his wife and sons, ages 6 and 2. After that, the goal is to get his head on a pillow by 9 p.m.

“And then get up the next day and do it all over again,” he said.

Much of the attention during the PGA Tour’s hiatus has gone, predictably, to the top talent: what Rory McIlroy is doing with his down time; when Brooks Koepka will next tee it up; who won the latest left-handed match between Justin Thomas and Rickie Fowler. But the Tour’s top stars are all in an enviable position to weather the current financial storm without making significant adjustments. The same can’t be said for the rank-and-file players, well below their pay grade, who scrapped and clawed for every check even before batches of tournaments disappeared in the blink of an eye.

Barnes is a prime example of the latter group. Since first gaining Korn Ferry status in 2015, he’s made at least 20 starts each year on the developmental circuit. But he hasn’t gotten his hands on a PGA Tour card, finishing as high as 39th on the money list in 2018 when he had a runner-up among four top-10 finishes.

Last year he was on the wrong side of the bubble at the season finale. Needing a par on the 72nd hole in Portland to retain full Korn Ferry status and avoid Q-School, he walked off with bogey and a heaping pile of unknowns. The pre-coronavirus portion of his 2020 schedule included made cuts in each of his three Korn Ferry starts, but also plenty of mini-tour appearances and ample uncertainty as to when his schedule might stabilize.

“He usually plays well when he needs to,” said West Florida Golf Tour director Christian Bartolacci, where Barnes has won nearly $9,000 in nine starts this year. “He’s a great player out there on the Korn Ferry, makes a lot of cuts. He just hasn’t had that one breakthrough event yet.”

Any hopes for that breakthrough were put on hold once the Korn Ferry schedule was paused in mid-March. Barnes’ family had just purchased a new home, complete with a bizarre closing process that included bringing his own pen to sign paperwork and social distancing from his realtor as virus concerns peaked.

His trio of Korn Ferry finishes this year grossed him less than $8,700, with much if not all of that wiped out by travel expenses to Panama, Colombia and Mexico. It didn’t take him long to dissect his budget and sense a need for action, with even the local mini-tour scene shuttered for the month of April.

“Something had to happen. There was just no other option,” Barnes said. “I wasn’t raised as the kind of guy who’s going to look for a handout. That’s just not me. So I’m going to do it myself, because it’s my family and my responsibility.”

In the midst of unpacking boxes in his new house, Barnes quickly assessed his options. He accepted a job working the overnight shift at a nearby Lowe’s hardware store, one that would still allow him to retain an afternoon practice regimen. But while waiting for his paperwork to process, he struck up a conversation with a manager at Publix. They were open to his request for flexibility and some unusual hours, and the proximity was too much to pass up.

“I figured it would give me just that much more time to sleep,” he said.

So his balancing act continues, replete with early mornings at the store and late evenings on the course. It’s not an ideal situation for a player with plenty of talent who is still fighting to earn his first PGA Tour start, but it’s one he has embraced during an unprecedented time of adjustment across the country and around the world.

“This affects everybody, don’t get me wrong. But from a financial standpoint, it’s obviously going to affect the guys that play on the Korn Ferry Tour, Latinoamerica, Canada, China and mini-tours far more,” Barnes said. “We live essentially on our endorsement money and the amount of money we make over the course of the year. Unless you have a great year, and you get to the PGA Tour, you don’t get to put a ton of money aside for situations like this.”

Barnes is in the midst of a stretch where he’s working 10 of 11 days at Publix. His lone off day was Monday, where he opted to play a short drive from his house in the first WFGT event since March. That proved to be a profitable decision: he shot an 8-under 64 to finish second out of 78 players, turning a $230 entry fee into a $1,000 check. While he missed an 8-foot birdie putt on the first playoff hole that would have doubled his earnings, he still made a solid return on his investment after bagging another $390 in skins money.

“Barnes is a gamer,” Bartolacci said. “There’s a ton of things that are probably going through his mind right now, but he’s still playing really well. That’s the type of player that this situation is hurting. Breakthrough year possibly in the works, and now he has to wait a little bit longer.”

Barnes hopes that his wait is drawing to a close. He put in a “soft two weeks’ notice” at the grocery store, estimating that he’ll need a couple weeks to focus fully on golf before the Korn Ferry Tour resumes next month. But if that re-start gets delayed, he knows he’ll need to return to the shelves until competition resumes.

And even at that point, there are no guarantees. Barnes’ conditional Korn Ferry status means he’s not a lock to enter either of the first two events in Florida, when he expects nearly every eligible player will want to tee it up. After that he should receive some improved access with a priority reshuffle, but he’s one of hundreds of players still coping with the loss of a direct pathway to the PGA Tour this fall with the creation of a Korn Ferry wraparound season that will extend to August 2021.

But Barnes is eager to return to a world where he’s sweating reshuffle rankings and season-long points. Until then he’ll keep his alarm set and the coffee brewing, rising early to stock shelves in order to make ends meet and keep his PGA Tour dreams alive.

“I didn’t feel that what I was doing was anything special, it’s just what had to happen for my family,” Barnes said. “And I will continue to do the best thing for my family for the rest of my life.”