They Said It: Best quotes from Masters Friday 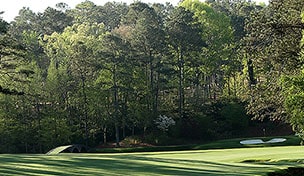 Ben Crenshaw, on the slow-play penalty assessed to playing partner Tianlang Guan: 'This isn't going to end up pretty, I don't think. I'm sick. I'm sick for him. He's 14 years old ... when you get the wind blowing out here, believe me, you're going to change your mind a lot.'

Trevor Immelman, on whether his 2008 win gives him confidence at Augusta: 'There's no doubt about it. Like I said yesterday and all week, I know what it takes to win here, and I know where the ball needs to be put and where it needs to be left on the second shots. It's just the execution part.'

Bernhard Langer, on his renewed mindset this year: 'I have a different attitude this year. I'm trying to win, trying to be on the leaderboard, and not just trying to scrape in and make the cut. So, so far, so good.'

Sergio Garcia, on difficult wind conditions that affected him on the second nine: 'When it's this gusty you have to get lucky because you have to guess if it's going to gust or not ... It feels like even on your good shots you're not getting rewarded.'

Fred Couples, on the more challenging pin positions seen on Friday: 'The pins here are always tough. I think yesterday, there were a couple new ones, and maybe they seemed a little easier. I thought today they went out there and they put most of the pins in, I thought, really hard spots.'

Phil Mickelson, on what it will take to get back into contention: 'I've got a little bit of work to do; it doesn't feel far off. My putter is very close .. If I can get a couple to fall and hit a few more good shots, I think that I have something in the mid-60s, which I will need tomorrow to get back into it.'

Rory McIlroy, echoing Couples' sentiments about the pin placements: 'There's a lot of Sunday pins out there today, so I don't know where they're going to put them for the next two days.'

Brandt Snedeker, on the slow play during the second round: 'I felt like the pace of play was fine. It was slow today, but you got a course like this with pins like this, with greens like this, with 30 mile per hour wind gusts, there's no way you're going to play fast. I don't care who you are.'

Jim Furyk, on the discipline required to play Augusta National: 'There's going to be places where you can attack the golf course and there's going to be times where you've got to kind of bite your lip and play conservative and hit to certain spots on the green, get out of there with a par and move on.'