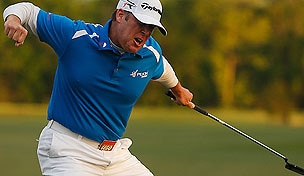 HUMBLE, Texas – D.A. Points finally proved something Sunday: He can win on the PGA Tour without Bill Murray.

In his lone previous victory, Points had teamed with the Hollywood funnyman at the 2011 AT&T Pebble Beach National Pro-Am, winning both the individual and team titles.

Following his win at the Shell Houston Open, he was asked jokingly about winning without Murray, but claimed – with all seriousness – that trying to reclaim that atmosphere helped him triumph again.

“I wasn't sure how I was going to re-create the same kind of levity that I had with Bill,” he explained. “I always reference one big point on the 16th green at Pebble. I hit a horrible tee shot off the tee and I hit a 5-iron short of the green and I kind of chunk it around and chip up and got like a 5-footer for par. My caddie looks at me, ‘How are you feeling?’ I'm like, ‘I'm freaking out. I feel awful. I'm so nervous.’ He's like, ‘Oh.’ He didn't know.

“And so I'm sitting there and shaking and trying to figure out some way to relax and to calm myself down, and Bill had like a 40-footer for par. I look over at Bill and say, ‘Hey, the whole crowd came here to watch you make this putt so why don't you roll it in?’ He laughed, because that's what he says to me over just about every putt. So I turned it around on him. It was just enough of that to kind of break the tension. I calmed down, I rolled in the putt and then went on to par the last two.”

Without Murray walking the fairways of Redstone Golf Club alongside him, Points needed something else to break the tension.

“So what I kind of came up with today was I would just give a really cheesy grin to my caddie because as it's been noted I can be hard on myself and I don't do as much smiling on the golf course as I probably should. So every time he wasn't looking at me, I'd kind of look at him with this big, cheesy grin. He would start laughing and I would instantly laugh. That was just enough of the stuff to break the tension.”