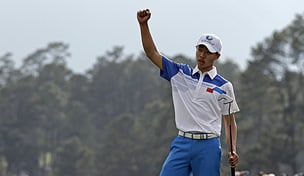 Getty Images
FT. WORTH, TX - MAY 30: Zach Johnson is taken off the 18th hole after play was suspended by dangerous weather during the final round of the 2010 Crowne Plaza Invitational at the Colonial Country Club on May 30, 2010 in Ft. Worth, Texas. (Photo by Scott Halleran/Getty Images)  -

With all the commotion Thursday during the first round of the 77th Masters, the brightest shining star on this overcast Georgia afternoon was a 14-year-old who was born 18 months after Woods won his first green jacket in 1997.

The loudest roar of the day came on Augusta National’s historic 18th green when Tianlang Guan made birdie from the fringe to record a 1-over 73. The diminutive teen – an eighth-grade student from China who would get knocked over in a stiff breeze if he weren’t careful – was the low man in his group that included 19-year-old Matteo Manassero (75) and 61-year-old Ben Crenshaw (80).

When Guan got up and down on the par-3 sixth hole, Crenshaw clapped. When the birdie dropped for Guan on the home hole, Crenshaw applauded like a doting grandfather. That’s high praise for Guan coming from man who is known as one of the purest putters in the history of the game.

“He stuck right to his plan the whole time. He didn’t get rattled.”

The plan was to keep the ball in play and never get too out of position, something Guan did beautifully most of the day. This is a big, burly golf course for a teenager and Guan hit hybrids into most of the par-4 holes but still collected an impressive card that featured four birdies against five bogeys for his 73.

“He did all he had to do,” said Manassero, who was low amateur three years ago when he played in the Masters as a 16-year-old. “You can see that he can do that again tomorrow without any problems.”

Said Guan: “A little bit nervous on the first tee. I just want to enjoy the tournament and have some fun. Hopefully play some good shots.”

A day ago, media-types were saying this week would be a success for Guan if he broke 80 in either of the first two rounds. Now, after the Herculean effort in Round 1, the young man who is listed as 135 pounds but looks more like 120, has a realistic chance to qualify for the weekend, especially now that the cut includes the top-50 players and ties.

Yes, it’s silly to think Guan could actually win the Masters this year but he was still asked if he has enough game to win the green jacket on Sunday.

“I think probably not this year,” Guan said with a broad smile. “I think one day in the future.”