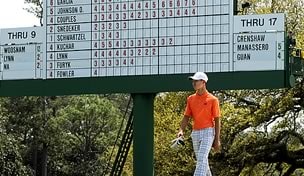 AUGUSTA, Ga. –Tianlang Guan made twice as much history as he wanted Friday at the Masters.

In a dizzying day of wonder and confusion, the 14-year-old phenom from China became the youngest player to make the cut in a major championship. He also became the first player known to be assessed a penalty for slow play in 77 years of the Masters.

The unprecedented penalty assessed at the 17th hole loomed like a foul odor over the afternoon’s thickening plot line.

The wrenching turn threatened to ruin a marvelous storyline with a controversial decision that couldn’t possibly have landed well back in China, where sports fans in the nation of 1.3 billion people are caught up in Guan’s magical run.

For a time after signing his scorecard, Guan looked as if he was going to miss the cut by a phantom stroke, a shot he never hit.

If golf is capable of an international incident, this seemed like it.

Guan was stopped before reaching the 17th green and informed by rules official John Paramor that he was being assessed a one-stroke penalty for slow play.

Guan was grinding hard on the back nine to make the cut. Stepping to the 17th tee, he was sitting right on the cut line for players within 10 shots of the lead. The penalty threatened to knock him out of the tournament. It made him sweat out an afternoon of wondering whether Tiger Woods, Jason Day or somebody else would do the duty.

In the end, after Woods stumbled coming home, after Day missed a 10-foot birdie chance at the 17th hole, Guan survived, barely.

Though the Masters has a cut to the low 50 scores and ties, Guan made the cut despite finishing tied for 55th. He made the cut by virtue of being within 10 shots of the leader.

“This isn’t going to end up pretty,” Ben Crenshaw, one of Guan’s playing competitors, said afterward. “I’m sick. I’m sick for him.”

Crenshaw didn’t sound like he agreed with the penalty, given the winds and difficulty of the course in the second round.

“I’m sorry, I’m a player, but it’s not easy to get around this golf course,” Crenshaw said.

Matteo Manassero also played alongside Guan, but he wasn’t as sympathetic. He said Guan did play slowly and needs to work on picking up his pace of play.

“Sometimes, most of the times, he takes a little too long,” Manassero said.

Manassero said Guan tended to interact a lot with his caddie, asking a lot of questions, wanting more information.

“To be honest, yes,” Jackson said. “In my opinion, they could have burned him yesterday.”

Jackson, however, was caught up in Guan’s magical run.

Guan accepted the penalty after a lengthy stay in scoring pleading his case.

“I respect the decision,” he said after signing a scorecard for a 75 that included the penalty-incurred bogey at the 17th.

Paramor, a European Tour official who works the Masters, explained the penalty to Guan before he stepped on to the 17th green, where Guan would two-putt for par. It wasn’t Paramor’s first involvement in a slow-play controversy. Even Tiger Woods gave Paramor some grief for putting Padraig Harrington on the clock in his duel with Woods at the WGC-Bridgestone four years ago.

Paramor, however, wasn’t alone making the decision to penalize Guan. Fred Ridley, the Masters competition committee chairman, was aware of the slow-play issue with Guan. He was standing behind the 17th green when Paramor assessed the penalty.

Afterward, Paramor said that he approached Guan four times about slow play before handing out the penalty.

According to Masters pace-of-play policy, while being timed, Guan had 40 seconds to hit a shot once it was his turn to play. A second bad time results in a one-shot penalty.

After hitting his drive in the right rough at No. 17, Guan took a considerable amount of time to play his second shot. He wandered out into the fairway to survey the hole. He conferred with his caddie.

“He again exceeded the 40-second time limit by a considerable margin,” Ridley said in a statement.

That resulted in the one-shot penalty.

Guan doesn't think he is that slow.

“I think my routine is good,” Guan said. “The only problem is I have to make the decision.”

There is little doubt Guan was in violation of the Masters’ slow-play policy. The larger questions surround the timing of the decision to penalize him. Guan is the first player in Masters history to be hit with the slow-play penalty, but is he really the first player to be in violation of the policy? Was it worth jeopardizing his wonderful story, as a 14-year-old from China, a qualifier who earned his way here as the winner of the Masters’ own Asia-Pacific Amateur Championship?

Brandt Snedeker, who played in the afternoon wave, wondered the same thing.

The Masters’ pace-of-play policy is similar to the PGA Tour’s, but it is not the same.