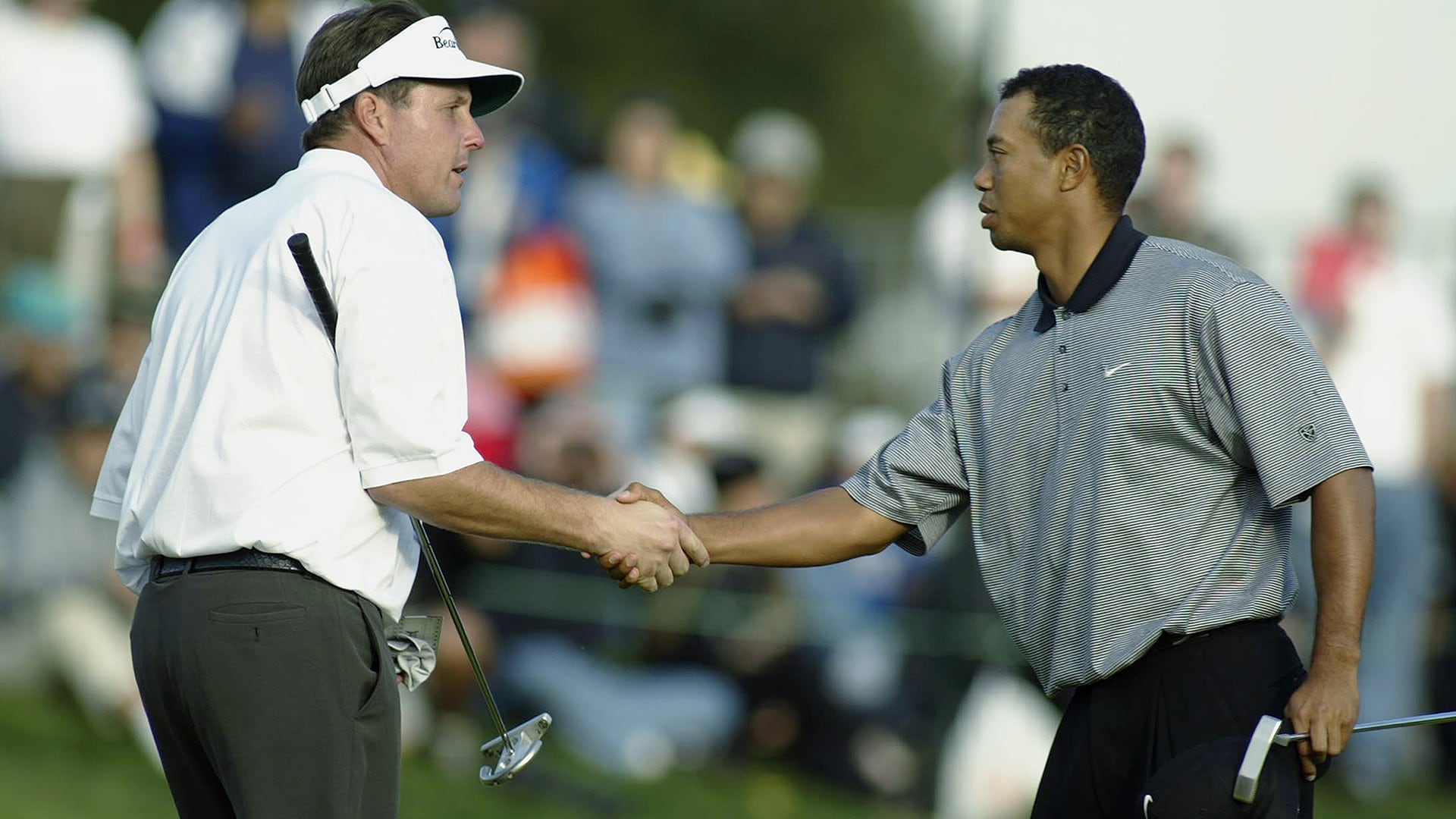 PONTE VEDRA BEACH, Fla. – When news surfaced that the PGA Tour was sending Tiger Woods and Phil Mickelson out in the same group for Rounds 1 and 2 at The Players, Rickie Fowler figured the best vantage point to watch the show was from home.

Whatever his motivation, it’s not bad advice.

“I'll probably be on the couch in my hotel room watching that one in the afternoon,” admitted Justin Thomas, who will be finished with his round on Thursday by the time Mickelson and Woods tee off at 1:52 p.m. ET.

On Tuesday, Mickelson added a playful touch to the proceedings. Although well short of, say, Conor McGregor’s pre-fight shenanigans, Lefty offered some light-hearted banter when asked about the heavyweight bout.

“I look at the cover of the newspaper and the pairing is on there and the excitement that's been going on around here, it gets me thinking: Why don't we just bypass all the ancillary stuff of a tournament and just go head-to-head and just have kind of a high-stake, winner-take-all match,” Mickelson said with a smile. “Now, I don't know if he wants a piece of me, but I just think it would be something that would be really fun for us to do, and I think there would be a lot of interest in it if we just went straight to the final round.”

Tiger vs. Phil: Head-to-head records on the PGA Tour

If social media is any indication, Mickelson may have a point. It seems many fans would be fine bypassing the formalities of 72 holes of stroke play, and Woods didn’t seem averse to the idea.

“I'm definitely not against that. We'll play for whatever makes him uncomfortable,” Woods said with a laugh.

But if Mickelson seemed a tad tongue-in-cheek regarding the big show, it likely had something to do with his long and complicated history with Woods.

For Lefty, this is a tale of two rivalries, which in the early years was wildly one-sided. In the 35 times the duo has been paired together in an official Tour event, Woods won 10 of their first 18 head-to-head duels and they tied three times. But in the last 17, Mickelson has won 10 times and they tied once. Woods holds the overall advantage, 16-15-4.

“Fifteen years ago my record against him sucked, and now it's OK. I'm doing better as time has gone on,” Mickelson said.

Some say the dynamic began to change in 2007, when Mickelson began working with swing coach Butch Harmon, who had worked with Woods earlier in his career.

Mickelson won The Players shortly after he and Harmon began their partnership. One of the high-water marks for Lefty in his Woods rivalry came at the 2012 AT&T Pebble Beach National Pro-Am, when the duo was paired on Sunday. Mickelson closed with a 64 to win the event by two strokes, while Woods struggled to a final-round 75 and a tie for fifth place.

The most recent head-to-head battle between the game’s two most high-profile players came at the 2014 PGA Championship, when Mickelson was 12 strokes better than Woods through the first two rounds.

But it wasn’t always that easy for Mickelson. Although Woods’ accomplishments are the stuff of legend, he and Mickelson crossed paths rarely in those prime years. But when they did it was normally a one-sided affair.

In 2005 at Doral, the two set out on Sunday in the final group, with Woods closing in 66 to clip Mickelson by a stroke, in what is considered one of the decade’s most entertaining duels.

Perhaps more than any other player, Mickelson can appreciate what Woods accomplished during his prime. He was there, for example, when Woods rolled in his “better than most” putt on No. 17 at the 2001 Players. At the time, Woods was just weeks away from completing the Tiger Slam by winning the Masters to claim his fourth consecutive major title.

Throughout the duo’s careers, the general consensus has been that there was some sort of animosity between them that went beyond the normal competitive fire. That theme took on more significance when the two – twice – paired horribly at the 2004 Ryder Cup.

“Phil and I have a great banter. We give each other the needle. We always have,” Woods said. “But I think our relationship has certainly gotten a lot closer with me being a vice captain the last couple teams and sitting there and having very lengthy conversations with him about things, not just the pairings but just about things in general.”

Animosity aside (be it real or perceived), the first two rounds at TPC Sawgrass are still must-see opportunities, even if that means your couch may be the best vantage point.