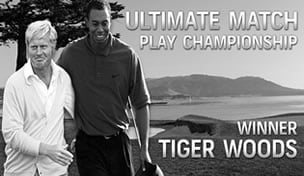 When Jack Nicklaus lashed his opening tee shot in the finals of the Ultimate Match Play Championship, lightning slashed over Pebble Beach Golf Links and thunder cracked across the Monterrey Peninsula.

Even the golf gods appeared to react to the Golden Bear’s perfect little fade into the first fairway in his epic showdown with Tiger Woods.

Woods, though, would bring down more thunder on this remarkable day.

In the end, at the Pebble Beach’s famed 17th hole, the cosmos hushed with Woods and Nicklaus stepping to the tee box. In fading light, the winds there died, the clouds stopped rolling, the surf quieted and even the sea lions stopped barking.

This is where the ultimate match was won.

Leading 2 up, Woods opened the door for Nicklaus, carving a draw too hard into the wind at the classic back-left pin placement and watching it skip into the heavy rough behind the hole. Nicklaus made the most of the opportunity. With that famous waggle, then a cock of his head before the takeaway, Nicklaus lashed a low, knock-down shot into the wind, a bullet right at the flagstick. His ball, just as it did in the final round here when he won the ’72 U.S. Open, caromed off the flagstick, stopping inches from the cup for a sure birdie.

Nicklaus marked his ball, but he wouldn’t get a chance to putt again.

Woods, with a hard, clever swipe of a wedge, popped his ball out of the rough and watched it track straight for the cup. With his ball slowing to a trickle, it appeared to stop on the lip, but only for an agonizing second. The ball had more wobble in it, one more quarter turn that toppled it into the hole.

Woods won in shades of Watson’s chip-in that beat Nicklaus here at the ’82 U.S. Open and in shades of Woods’ chip-in at Augusta National when he won The Masters in ’05 after holing out off 16th green.

The golf gods let it be known they were watching again.

The cosmos shook when Woods’ last shot disappeared, sending a minor tremor through the ground beneath the feet of all the fortunate patrons who were lucky enough to witness the ultimate showdown between the two greatest players who ever lived.

No matter how you imagined the Ultimate Match Play Championship would unfold, this is the result you wanted.

You wanted Woods winning it all.

Over five weeks, you cast your votes to determine who would win a match-play championship featuring the 16 greatest players who ever lived.

Nicklaus advanced to the finals defeating Phil Mickelson with 93 percent of the vote in the first round, beating Gary Player in the quarterfinals with another 93 percent pull and eliminating Bobby Jones in the semifinals with 74.9 percent.

Woods made it to the finals defeating Seve Ballesteros with 79 percent of the vote in the first round, knocking out Tom Watson in the quarterfinals with another 79 percent pull and eliminating Ben Hogan in the semifinals with 64.5 percent.

While Woods had an answer to Nicklaus in our imaginary final of the Ultimate Match Play Championship, we now get to see if he has an answer in the real game, in Woods’ quest to surpass Nicklaus’ record of most professional major championship victories. The question whether Woods or Nicklaus is the greatest who ever played is a good debate even with Woods having 14 majors to Nicklaus’ 18, but if Woods ever passes Nicklaus, then Woods’ answer becomes definitive.