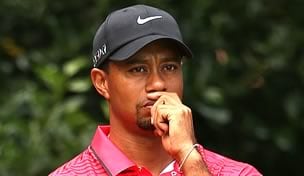 Getty Images
AUGUSTA, GA - APRIL 09: Jack Nicklaus signs autographs for fans during the third day of practice prior to the start of the 2008 Masters Tournament at Augusta National Golf Club on April 9, 2008 in Augusta, Georgia. (Photo by David Cannon/Getty Images)  -

Criticized all week for his conservative game plan at Royal Lytham, Tiger Woods became too aggressive in a greenside bunker Sunday and it likely cost him a chance to capture his fourth claret jug.

Buried near the lip of a greenside bunker at the par-4 sixth hole Sunday, Woods needed two shots to extricate himself, then three-putted on the green for a deflating triple-bogey 7, effectively ending his chances in the 141st Open Championship. He closed with 73 and finished in a tie for third, four shots out of a playoff.

After that triple bogey – his first in a major championship since the 2003 British Open – Woods trailed Scott by five shots. He birdied Nos. 7, 10 and 12 to move within four shots of Scott’s lead, but followed that stretch with wayward tee shots and three consecutive bogeys.

His performance at Lytham continued a disturbing trend for Woods in the majors: In the three major championships this year, he has failed to break par in a weekend round.

“Even the greatest players to ever play have all gone through little stretches like this,” he said.

Though it’s little consolation, Woods is expected to move from No. 4 to No. 2 in the Official World Golf Ranking, his highest position since December 2010.