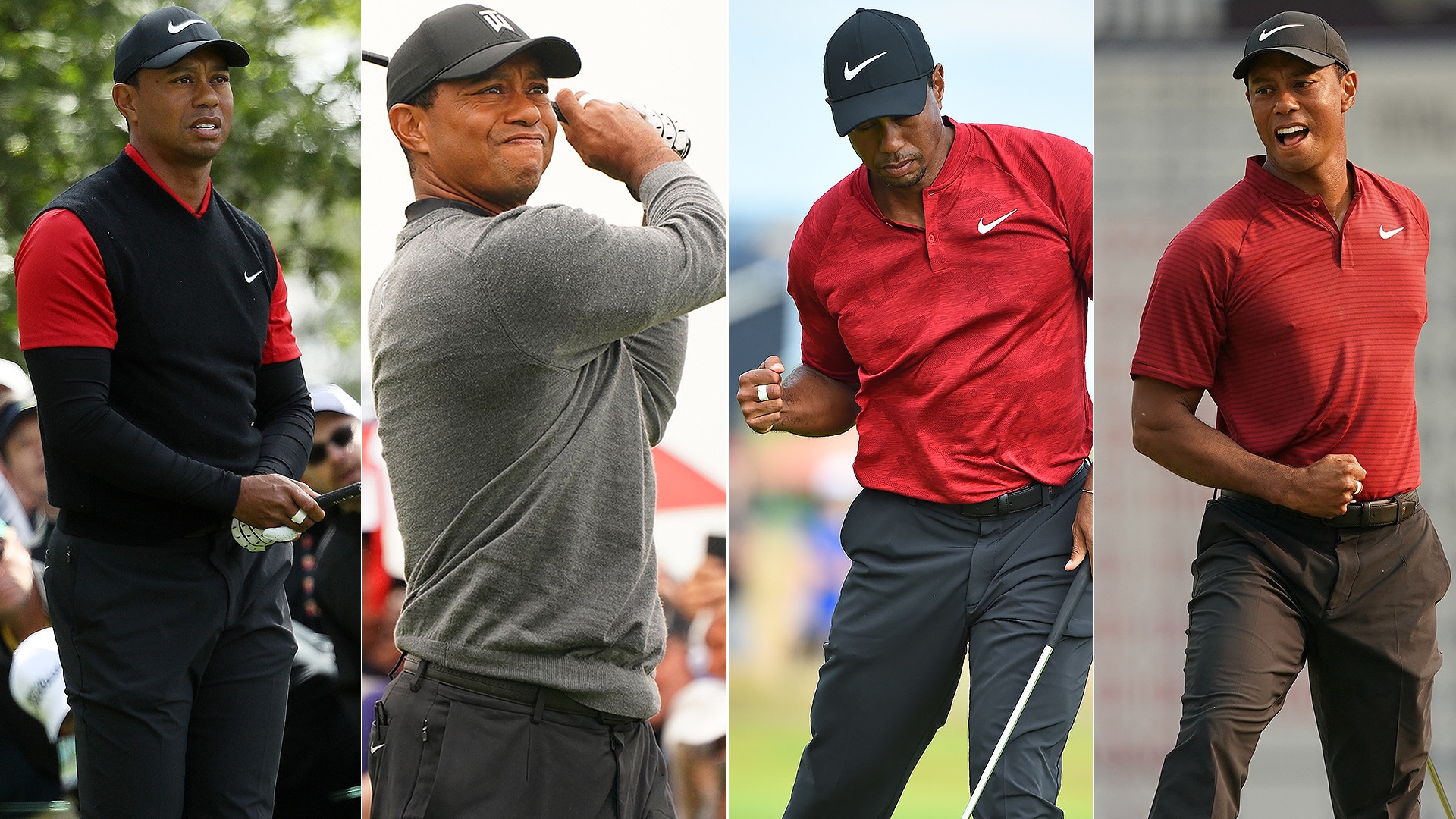 And now, back to our regular programming, as we rejoin "The Tiger Woods Comeback," still in progress.

We apologize for the interruption, but Ryder Cups always provide a powerful first impression, a rush to judgment, and a lingering aftermath.

Woods was part of all that, going 0-4 in the American team’s 17 1/2 to 10 1/2 loss to Europe in France. To many people, the dull body language that accompanied his mediocre play may have spoiled all that he accomplished this year.

We heard the familiar refrain that Woods is too remote a personality to play effectively with partners. Some also wondered that after his victory the week before at the Tour Championship – so long in coming, so powerfully emotional – whether Woods, who will be 43 in December, is sated and ready to ease out of all this return-to-glory business.

That last part? Don’t think it for a moment. As a golfer, Woods has miles to go before he sleeps.

That’s because the hard part is over, and the best part is about to start. Woods’ long ordeal – nine years filled with dark days and injury that began with a personal scandal in 2009 – seems to have finally ended. A successful back fusion in 2017 has had a Lazarus-like effect on him physically, while the process of overcoming personal adversity has matured him as a person. After finally cresting what must have seemed an endless incline, the road before Woods may very well appear a flat straightaway, one that promises to be long and even downwind.

But first, let’s put that Ryder Cup performance in context. Woods arrived in Paris worn out, his tantalizing improvement colliding with an overcrowded late-season schedule. The best example was how his surprising T-6 at The Open got him the last spot in the field at the WGC-Bridgestone Invitational. Rather than taking a full two-week break to rev up for the season’s home stretch, Woods couldn’t pass up playing at the venue where he had eight previous victories – including a seven-stroke romp in 2013 that was his last tournament win.

But a drained Woods didn’t have it at Firestone, and he finished T-31. He was brilliant the next week at the PGA at Bellerive, where he was second to Brooks Koepka, but in his first full season since 2013, he was already on the verge of being over-golfed. He may have felt closer to his first victory in five years, but going on to play all four of the FedExCup Playoff events meant he would have to dig very deep.

In that regard, his triumph at the Tour Championship – at least in relation to the Ryder Cup – was Pyrrhic. The massive cheering throng that surrounded the 72nd green was a profound signal of what the victory must have meant to Woods personally. But four hours later he was on the team charter to Paris, his opening match five days away. It’s easy to say Woods just doesn’t care enough about the Ryder Cup – his 13-21-3 record is Exhibit A – but there’s more evidence that he simply didn’t have time to sufficiently recharge.

That empty look and dull body language that Woods carried at Le Golf National wasn’t from apathy or age. I had seen it before. While at Stanford, Woods – who took his college studies seriously and enjoyed being anonymous in the classroom among students he called brainiacs – would sometimes complain that he was tired and relatively unprepared because of trying to keep up in school. His demeanor during some college tournaments could be flat.

I saw the look again in a hotel room in Endicott, N.Y., in September 1996, a few hours after the 20-year-old Woods had finished T-3 in a rain-soaked and abbreviated BC Open. The week had been a constant whirlwind of not only competition, but fan frenzy already known as Tiger Mania. Woods had been on a runaway train of commitments since his epic victory the month before at the U.S. Amateur, leading to his decision to turn professional and debut at the Milwaukee Open, followed in consecutive weeks with the Canadian Open and a near-victory at the Quad Cities Open. His motivation for playing so much was to earn enough prize money to avoid having to earn his card at the Tour’s Q-School.

In Endicott, Woods packed his bags to make a plane that would take him to Callaway Gardens, Ga., for the Buick Challenge. His actions were brisk, but his face was an expressionless mask. He would go on to hold a news conference the next day, but Wednesday before the pro-am he withdrew, citing exhaustion. It meant he would miss a dinner Thursday where he was to receive the Haskins Award, a decision for which he was heavily criticized.

Two months later, Woods would return to Callaway Gardens to attend a makeup Haskins dinner. In his acceptance speech, he apologized, but by that time Woods' withdrawal was being looked at as a smart move. It had given him a few days’ rest, after which he went to Las Vegas and got his first victory on the PGA Tour.

Woods would be careful to never again get caught up in such a rushed and taxing playing schedule. Until this summer.

Woods is resting now, unlikely to play anywhere the rest of the year outside of his pay-per-view match with Phil Mickelson, and then the next week at the tournament he hosts, the Hero World Challenge. He’s gearing up for 2019.

His approach will be far different than this year, when Woods was in full search mode and needed reps. Even though his fused back never appeared to cause him a serious problem, he had to rediscover his game. It turned out to be a slower, more methodical return than he probably expected. He had much to learn about his body, his swing, his equipment, and his competitive mind.

Woods got himself in the heat at Valspar and Bay Hill, only his fourth and fifth tournaments of the year, but then stalled over the next five. But his T-4 at the Quicken Loans showed new progress that he carried through the PGA Championship. Then at the BMW Championship, he appeared to embark on a new commitment to sacrifice distance off the tee in the interest of hitting more fairways. Besides adding a degree of loft to his driver, he slowed his swing down about 5 mph, employing a smoother hitting action that two of his former teachers, Butch Harmon and Hank Haney, had both encouraged.

All season, Woods worked on his game without a swing coach. Close observers have remarked on an improved rhythm in his action, and less attention, at least in his public practice sessions, to body and club positions. By the second half of the year, there was a subtle but noticeable sense of flow to Woods’ rounds, especially with his iron game, which has featured breathtaking runs of sharp shooting. Indeed, when Woods is rolling as he did at Carnoustie, Bellerive and East Lake – hitting fairways, shaping approach shots, showing short-game mastery and sure putting – he looks like the most complete, and maybe still the best, player in golf.

Woods has said little about 2019, but I think there will be two main themes: Less is more. And, to a greater extent than ever, it’s all about the major championships.

No doubt Woods will play fewer than the 18 official events he entered this year, and likely between 12 and 15. It will be a schedule predicated on being fully ready for four weeks. Yes, passing Sam Snead’s record of 82 career PGA Tour victories will be on Woods’ mind (he needs three more), but majors count toward that total.

The plan would be a time-honored tradition that’s been vetted by the very best. Bobby Jones followed it all his career, including his Grand Slam season in 1930. Ben Hogan seldom played in non-majors after his car accident in 1949, and the rest of his career would win six majors against only five regular events. Jack Nicklaus, especially after age 30, established the model that Woods has generally followed. The pattern for all was “prepare, peak, play (wins), rest and repeat.”

Coming into this year, Woods – through a combination of injuries and bad play – had last made a cut in a major at the 2015 Masters. Any hope of catching Nicklaus’ record of 18 majors seemed gone, but this year has restored a glimmer. Traces of a mental barrier were evident at Carnoustie, where Woods responded to holding the lead after 10 holes of the final round by making a double bogey on the 11th and a bogey at the 12th. But that championship was the deepest contention Woods achieved in a major since losing to Yang. And it led to the breakthrough at Bellerive, where he didn’t make a crucial mistake until pushing his tee shot into a hazard on the 71st hole.

Woods’ victory at the Tour Championship was most significant for his confidence in being achieved on a major championship style set up at East Lake. Indeed, since downshifting slightly with his driver, Woods’ overall game is more suited for winning majors than it has been since 2013, and he might be mentally stronger now.

Next year, the first three majors are at venues where he has won – Augusta, Bethpage, Pebble Beach. If he doesn’t get one, and especially if he doesn’t seriously contend in any of them, any dreams of his catching Nicklaus will be dealt a blow. But if he can win one, it will prove he can win another. And the most important record in golf will be back in play.

Of course, Woods’ greatest rival is the clock. Now that he is close to regaining an elite level of play, how long can his body, motor skills and motivation hold out? Woods beat very long odds to get from where he was in 2017 to where he is now. But even though he’s in a much better starting position, the odds against getting where he wants to go from here are just as long.

Whether he makes it, there’s a collective satisfaction that Woods’s final act as a player has dramatically morphed into something far more commensurate to the greatness that came before.

But what makes the future so intriguing is that we can strongly sense what Woods wants for himself. Because his gift has always been to somehow make that happen. What was most remarkable about 2018 was that he seemed on his way to doing it again.