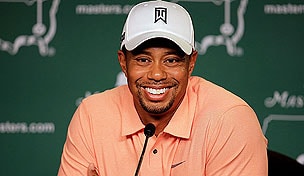 AUGUSTA, Ga. – Tiger Woods will play with Luke Donald and Scott Piercy in the first two rounds of the Masters, according to the starting times released Tuesday by Augusta National officials. Woods' group is scheduled to tee off at 10:45 a.m. Thursday and 1:41 p.m. Friday.

The Masters will begin with Arnold Palmer, Gary Player and Jack Nicklaus as the honorary starters. They’ll each hit a tee shot to open the tournament Thursday at 7:50 a.m.

Defending champion Bubba Watson is in the traditional Masters pairing with the U.S. Amateur champion, Steven Fox. Ian Poulter is the third player in that grouping. They’re off right in front of the Woods group at 10:34 a.m. Thursday and 1:30 p.m. Friday.

Phil Mickelson will play with Louis Oosthuizen and Martin Kaymer at 1:30 p.m. Thursday and 10:23 a.m. Friday.

Two-time Masters champion Ben Crenshaw, 61, is grouped with the youngest player in the field, 14-year-old Tianlang Guan, and another teenager, 19-year-old Matteo Manassero.