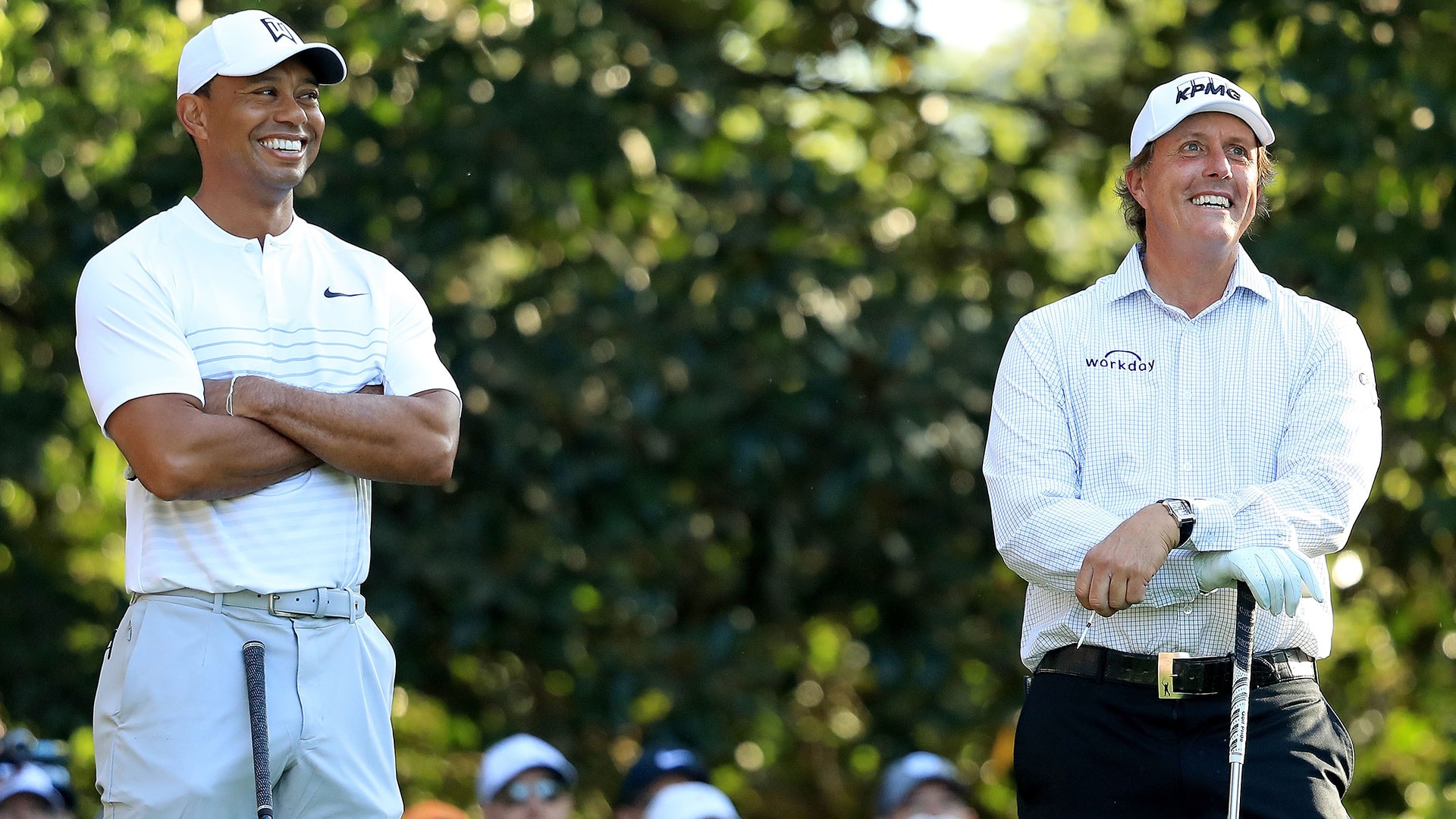 CHARLOTTE, N.C. – For only the 11th time in the two decades they’ve spent together on Tour, Tiger Woods and Phil Mickelson will be grouped together on Thursday and Friday.

The PGA Tour announced on Sunday that Woods and Mickelson will play alongside Rickie Fowler for Rounds 1 and 2 at the The Players Championship.

Following his final round at the Wells Fargo Championship, Woods was asked if he enjoys the rare opportunities he gets to compete head-to-head with Mickelson, who he joined for a practice round last month at the Masters.

“Oh, yeah, I do enjoy it because we don't get to do it very often. We are normally paired up on the weekend if we are both playing well, and even that's a rarity,” Woods said, before referencing the 2008 U.S. Open, when he, Mickelson and Adam Scott were grouped as the Nos. 1, 2 and 3 players in the world.

“That was a blast for us. That was one of the very few times, if not the first time we played together the first two rounds. We don't get the opportunity to do it very often. We've been going at it for the better part of over 20 years, and it's fun for both of us to be able to do that.”

To his point, Woods and Mickelson have played only 35 total rounds together on Tour through 237 events in which they’ve both been in the field. When playing together on Tour, Woods edges Mickelson in scoring average, 69.6 to 69.9.

With a new crop of stars having emerged in recent years – Fowler, Jordan Spieth, Dustin Johnson, Jason Day, Rory McIlroy and more – it’s possible the Tour would look to more Mickelson-Woods pairings in the future, perhaps no longer needing to put them on opposite sides of the draw. As for whether those pairings will come to pass, Woods isn’t sure, but he seems interested.

“You know, I don't know. It's up to the Tour,” he said. “I know they're trying to do these new featured pairings … especially the first couple days because of the new media coverage we have with these live streams early on, so you get the early-morning guys viewed. So they want to have some star-studded pairings. You know, I think that it will be fun for all of us, especially for Phil and I.”

Amusingly, the last time Woods and Mickelson played together at The Players, Fowler was just 12 years old. It was during the third round in 2001, when Woods did this:

Reminded of that by as a reporter as he walked off the podium, Woods responded with a smile.

According to Fowler, the group was approached “a few months” ago about the possibility and they all embraced the idea.

“I love it. I love the chance because we don't get it very often. Rickie's a great complement to the group and we're going to have a lot of fun,” said Mickelson, who was last paired with Woods at the 2014 PGA Championship.

For Fowler, it will be the first time he’s played with Woods on the PGA Tour since the ’15 U.S. Open. He’s been paired with Mickelson three times this year, including the first two rounds of the Masters.

“It’s fun to be in a pairing with guys that are my good friends now, but guys all of us looked up to,” Fowler said. “It will be a cool atmosphere and feel more like a weekend, being in contention type of thing. I think it helps you focus compared to being in kind of a quiet pairing.”