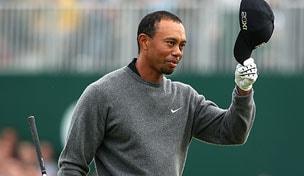 Getty Images
SUNNINGDALE, ENGLAND - JULY 24: Fred Funk of the USA (right) is congratulated by playing patner Mike Harwood of Australia after holing his second shot for an eagle on the 18th hole during the second round of The Senior Open Championship presented by MasterCard held on the Old Course at Sunningdale Golf Club on July 24, 2009 in Sunningdale, England. (Photo by Andrew Redington/Getty Images)  -

Tiger Woods never abandoned his ultra-conservative game plan Friday in the Open Championship – even on the par 5s.

Now, only four shots back of Brandt Snedeker after 36 holes, the former world No. 1 may not have to deviate from that tactical approach to catch the leaders over the weekend.

Woods rolled in a 20-foot birdie putt on 16, then holed a greenside bunker shot on the final hole – unleashing a few emphatic fist pumps after the ball tumbled into the cup – to shoot a second consecutive 3-under 67. He’s in solo third at rain-softened Royal Lytham & St. Annes.

“I’m very pleased,” Woods said. “I had a plan I thought would be effective on this golf course, and I’m executing it so far.”

Interestingly enough, Woods’ lone bogey Friday came on the par-5 11th, when he hit iron off the tee as others bashed away with driver and tried to reach the green in two. Woods’ tee shot found thick rough right – only his second missed fairway of the week. From there, he pulled his second shot into the left rough, was forced to lay up, then flew his wedge shot over the green and made bogey-6.

Other than that blemish, it was another ballstriking clinic for Woods as he continues to play conservatively off the tee in an attempt to avoid the 205 pot bunkers and juicy rough. Through two rounds he’s hit only three drivers, and missed just two fairways and seven greens.

“We’ve got a long way to go,” Woods said. “I needed to post my round and get up there. This golf course, we haven’t seen it yet with the wind that we’re supposed to get around this place.”