Closing out tournaments harder for some 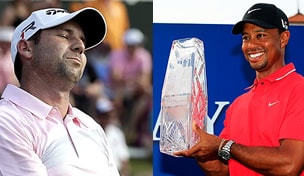 Yes, also, Woods is a competitive force of nature and he has shown a knack for hitting great shots in the most important moments. His up-and-down on No. 15 Sunday was world class; it seems the more you know about golf the more amazing and improbable that up-and-down became. “His calm intensity goes up a notch in pressure moments,” tweets legendary tennis star Chris Evert, whose own calm intensity was often celebrated. She adds: “Unmatched.”

When Sergio Garcia reached the 17th hole Sunday, he was tied with Tiger Woods for the lead, and he felt pretty good. No. Better than that. The early part of the day had been a bit of a struggle, but the last five or six holes had been outstanding. He was hitting the ball just where he wanted to hit it. His confidence – always a shifting wind for the mercurial Sergio – was overflowing. Truth is: He felt AWESOME.

An hour earlier, he seemed to be out of this tournament. Woods led by three, and everyone knows Woods doesn’t blow tournaments on the last day. More than that, Garcia felt kind of lethargic, kind of lifeless, his shots were spraying astray, he was working too hard just to keep his score still. It just wasn’t his day, or as he explained: “Some days… you feel like your whole body is moving the way you want it. Some days it wants to fight a little bit with you.”

So, when the shocking turn happened – when Woods hooked a drive into the water on No. 14 and, at almost that exact same moment Garcia made a birdie and started feeling like his body was moving the right way again – Garcia felt like this might be his day. On the par-5 16th hole, he striped a drive, hit a brilliant second shot on the green, lagged his eagle putt and made birdie to tie the tournament. As he went to the 17th hole, he would say, he felt great.

It is simply this: You don’t have to be perfect to win. You can’t be perfect anyway. You just have to hang in there, put the bad stuff behind you, think good thoughts and more than anything be good enough to make your opponent perform under pressure. Then, more often than not, they will make the big mistake.

And Woods, if anything, is an even more effective mirror. He makes opponents face themselves – not just their fears but also their arrogance and their doubts and their flaws and their history. Woods has now won 52 of 56 times he has either led or shared the lead after three rounds. That’s 93 percent of the time, which is extraordinary. Yes, sometimes along the way, everything clicks and he runs away from the field. But most of the time he doesn’t. Most of the time he just minimizes his mistakes and lets time and pressure do their thing. Time and pressure are his friends.

So it went Sunday. When Woods hit his terrible shot on the 14th hole, he quickly put it behind him and nailed his next drive. When he needed to make his brilliant par-save on 15, he made it. When he faced the island green on 17, he did not think about anything except putting the ball on the green. Woods knew that he could not win the tournament there on No. 17 but he COULD lose it. When you asked Tiger Woods what he was thinking about on the 17th tee, he talked in technical terms. Distance to the front of the green. Distance to the flag. Wind direction. There was one objective, and that was to keep the ball dry. Objective accomplished.

When Sergio Garcia stood on the 17th green, well, you know, he felt good. He felt like maybe he was going to win the golf tournament. He felt like he was so buzzed with adrenaline that he better take a lesser club.

“Maybe a little too confident,” he would admit.

Garcia and Woods had a silly little spat over the weekend. The spat was technically over what was probably a misunderstanding – Saturday, on the second hole, Woods pulled a club and the crowd started cheering just as Garcia was trying to hit his shot – but the truth is that it had been bubbling for a long time. They don’t like each other. That little scene was just an excuse to let it all out.

Best I can tell: Tiger thinks Sergio is a whiner and kind of a loser.

Best I can tell: Sergio thinks Tiger is a bully and kind of a jerk.

That might or might not be overselling it, but they clearly don’t like each other. However, that dislike means something different to each of them. Woods, I imagine, could not care less about Garcia. Woods has won 14 major championships and 78 Tour events and is not just the preeminent golfer of his day but probably the best who ever lived. Garcia, meanwhile, has won zero majors, has had an up-and-down career, often feels cursed and has never beaten Woods head-to-head. So, yeah, they have different emotions about their feud.

“If you had to do it over again,” someone asked Garcia about his Woods complaining, “would you do things differently?”

“No, no,” Garcia said. “I don’t know, you sound like I was the bad guy here. I was the victim. I don’t have any regrets of anything.”

Yes, inevitably, Garcia sees himself as the victim.

And so, we go back to the 17th tee, ball in the air, Garcia watching and thinking he hit a really good shot. Woods had put him in this place. Woods had made his mistakes, and he had missed his putts, and he had not run away with the tournament when it looked like he had the chance. But that’s not at the heart of closing. At the heart of closing is that on the 17th, Woods put his shot on the green. It wasn’t a perfect shot or anything close. But it was on the green.

“We just go out there and play,” Woods said when asked if it was special beating Sergio. “I had an opportunity to win the golf tournament when I was tied for the lead today.”

“And,” Woods continued, “I thought I handled the situation well.”

One last word about closing: A reporter asked Tiger Woods who would win in match play between the current version of himself and the young Tiger Woods. His answer was fairly typical and expected. “I would win now,” Woods said.

The surprise came when the reporter asked the score. “Would you win 9 and 8?” he asked. Woods was ready for this.