Tiger the grinder: Turning lemons into 66 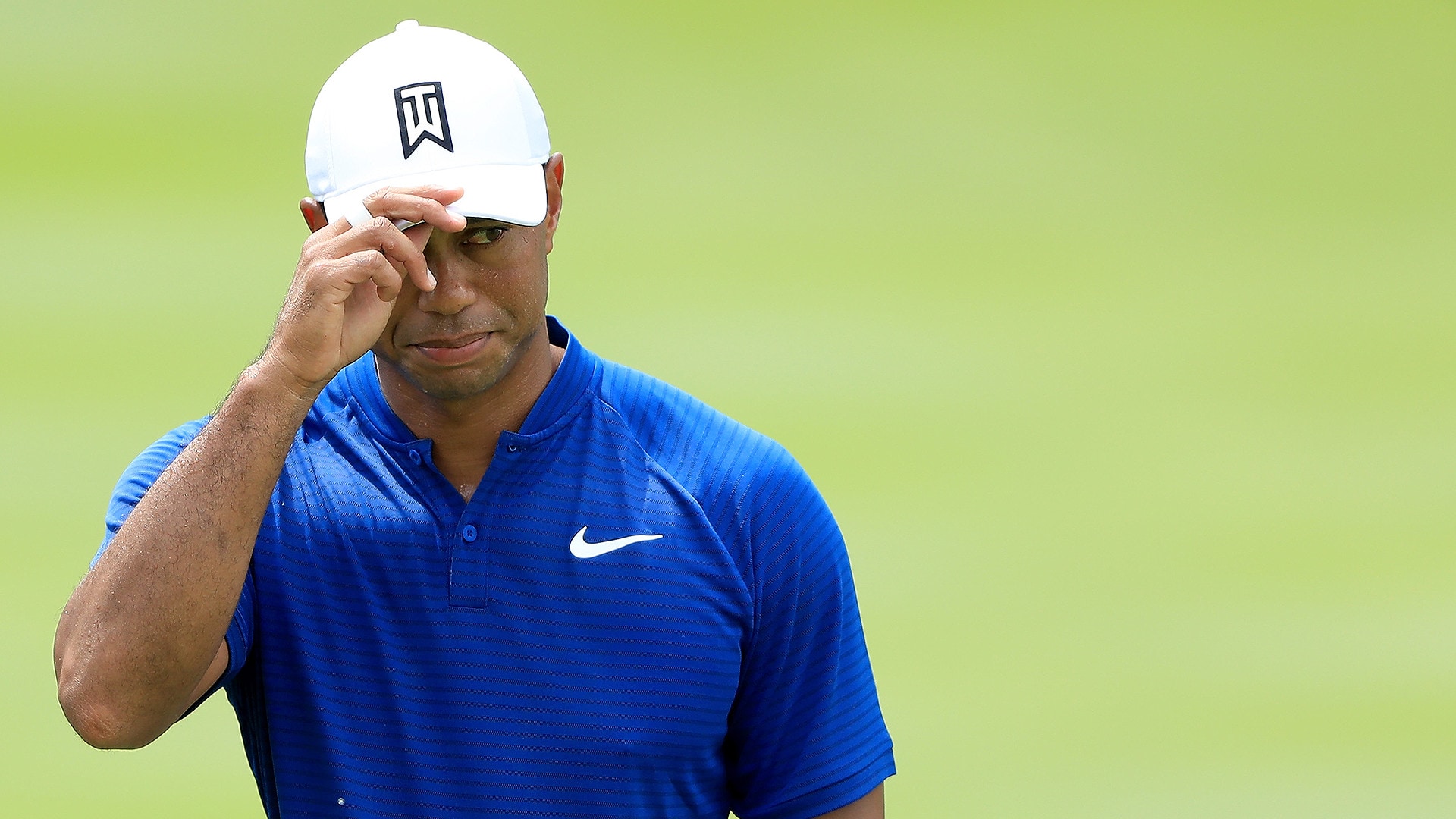 AKRON, Ohio – In a strange way this was the Tiger Woods we all missed.

This wasn’t the guy who made the game look so effortless for the better part of two decades, the guy whose play could demoralize a field with a rare combination of power on command and unrivaled creativity.

This was the player, who on his bad days – and Tiger had bad days even when he was at his best – found a way to turn a 71 into a 66. The kind of player who missed right and left with equal abandon and yet signed a scorecard that left him squarely in the hunt.

Tiger began his day at the WGC-Bridgestone Invitational well enough, going 6-for-6 in fairways hit on his opening loop (Firestone’s back nine) and facing birdie putts on each of his first eight holes.

The first crack came on the 18th hole, his ninth of the day, when he missed his drive left. He’d hit just one more fairway on his way to the clubhouse and yet still signed for a 4-under 66 that left him just three strokes off the lead.

“I just kept either hitting a pull or hitting a cut. I just couldn't quite get a feel for it,” Woods said. “Even with my irons I wasn't very sharp on the back nine. But I was just kind of hanging in there with it. Wasn't exactly what I wanted to do today, but as I said, I ground out a score today, which was good.”

This didn’t have the brilliance of Tiger’s third-round 66 two weeks ago at The Open or his second-round 65 at last month’s Quicken Loans National. This was grittier, a blue-collar effort that was equal parts putting magic and determination.

This was the kind of round he used to have on a random Thursday that was often overlooked because he’d do his Tiger thing on Sunday and that’s, understandably, all we’d remember.

“He's out there and he's focused,” said Jason Day, who was paired with Tiger on Thursday at Firestone. “I mean, you could tell he wants it because he's taking a good long time hitting these putts. And that's not only 5-, 10-footers, it's over every putt.”

Tiger has talked a lot about perspective in recent months. At first it was the perspective that comes following a major back surgery and the idea that this will take some time. That’s evolved in recent weeks as his play has elevated. His sixth-place finish at Carnoustie took some time, and some cool mountain air in Switzerland, to get over and he arrived in Ohio for the final Bridgestone Invitational with a distinctly different outlook.

“I went from just hoping to be able to play the Tour to now that I feel that I can play the Tour. I certainly can win again,” he said on Wednesday. “I've had an opportunity to win a couple times this year. I had a great chance at Valspar early in the year, and even a week ago I had a great shot at it.”

If that sounds more like the old “second sucks” guy, he’s come by his new confidence honestly.

For those in Tiger’s universe, there’s also a different perspective. Asked to assess Woods’ comeback, Rory McIlroy seemed to speak for many.

“I saw his sort of profile come up on the board and he's already had four top-[6s] this year, and he's given himself a couple chances to win,” McIlroy said. “I thought it was going to take a little bit longer than that, but I guess when you're sort of born with it, you have a knack for getting yourself in there and giving yourself a chance, I guess it never leaves you.”

But if it seems like Tiger’s rise back to competitive relevance has been nothing short of meteoric, which is understandable given this is just his 13th start this season, those who have been anxiously awaiting a comeback without caveats might have a slightly different perspective.

It was hard to ignore Thursday’s scrappy 66 as a healthy step forward in that process. It was the kind of round that probably won’t end up on the highlight reel or in the history books, but it was Tiger Woods at his best – a player whose talent is matched only by a force of will that’s able to turn a forgettable round into something that looks impressively familiar.