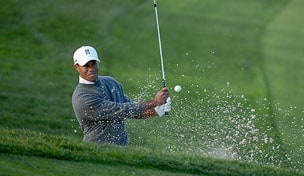 SAN DIEGO – Tiger Woods might have set up his victory Monday at the Farmers Insurance Open by leading the field in total driving through the first three rounds, but he was just as excited about his ability to wipe out mistakes with a resurgent short game.

“My short game was back to how I know it can be,” Woods said. “My shots, especially out of these nasty little lies, I hit some really good ones. That allowed me to save some pars, save some birdies and move my way up the board.”

Woods holed out from a bunker for eagle at the sixth hole in Thursday’s first round. He holed a 40-foot chip at the fourth hole in the final round to complete a great escape from behind a tree and make birdie.

After spending so much time honing a new swing under coach Sean Foley last year, Woods devoted himself more fully to his short game this offseason.

“You only have so much time in a day, and, obviously, with family responsibilities, that’s a priority,” Woods said. “It was nice to not have to hit so many golf balls and work on my short game. I think that’s where you’re seeing the rounds evolve. I’m saving a shot here, saving a shot there, and that’s leading to a birdie here and there. Next thing you know, it’s a three or four-shot swing.”