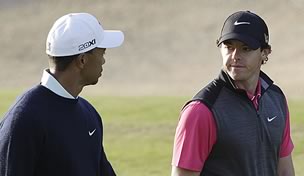 PALM BEACH GARDENS, Fla. – As someone who made the switch from Titleist to Nike early in his career – albeit more gradually than Rory McIlroy – Tiger Woods is eminently qualified to analyze the challenge his friend and rival is facing following that move.

“Understandably, he's going through the process,” Woods said of McIlroy, who missed the cut in Abu Dhabi and lost in the first round of last week’s WGC-Accenture Match Play Championship in his only two starts so far this season. “We talked about it a little bit. It is a process. The good news is about today's equipment, we have so many different ways of testing it and tracking it and getting numbers, which back in the days even when I came up and obviously well before then, you didn't have these numbers in which you can get your launch conditions, your spin rate, basically any kind of data you want, any kind of data you can get. That wasn't the case.”

Woods and McIlroy have not only played a lot of competitive golf together in the past year, they’ve also forged a friendship, giving the former a first-hand look at how the latter is dealing with newfound superstardom.

“I think Rory is doing a fantastic job,” he said. “As far as in my career, it happened very quickly. I turned pro in August; I think by Augusta, somewhere in there, I became No. 1. So it was a bit quick. Just came out of college and next thing you know, I'm No. 1 player in the world. It was a little bit faster than what Rory has had. He's had time to adapt and to grow into it. I think he's done a fantastic job of it.”