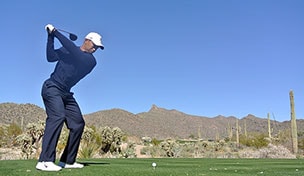 MARANA, Ariz. – All together now – 18-holes of match play is the competitive equivalent of a scratch-off lottery ticket.

Each year we hear the same lament, a solid round can be spoiled by an opponent with a red-hot putter just as easily as a pedestrian display can be salvaged by an off-form adversary.

The contrast of match play is such that upsets – large and small – neither surprise nor circumvent the competitive integrity of the event. Consider that last year’s opening round featured 15 upsets and in 2011 there were 14 lower-seeded players who survived Round 1. Neither of those marks, by the by, come close to the all-time number of Round 1 stunners set in 1999 (18).

In short, betting chalk at the WGC-Accenture Match Play Championship is an occupational hazard.

For the better part of a decade, however, Tiger Woods has largely defied conventional wisdom, which may explain his Tuesday body language that featured neither angst nor apprehension.

If Woods was thinking short term on Tuesday at Dove Mountain he wasn’t letting on. “The only reason I enter events is to win,” he said. “It's not to make the cut or finish top 10 or even second. It's to win the event. There's really no reason to enter if you don't have the mindset or belief that you can win, and I feel like I can win every time I play.”

If the statistical reality of that comment doesn’t add up consider Woods’ record at golf’s version of March Madness pre-2009. In nine starts he has been bounced in Round 1 just once, in 2002, and has advanced past Day 2 on all but two occasions.

The capriciousness of match play aside, Woods still managed to win three of those nine outings. Of course, that was before his professional and personal fortunes took a wrong turn in late 2009. In his last three Match Play starts Woods hasn’t made it to Friday.

Yet there he was on a windblown stage on Tuesday, smiling for cameras and telling tales of his round with President Barack Obama on Sunday in south Florida.

“We won,” he beamed when asked about his four-ball match paired with the commander and chief.

And why shouldn’t Red Shirt view this week’s collection of title bouts with optimism?

He’s fresh off his seventh victory at the Farmers Insurance Open last month, (Note to WGC-Match Play organizers: if you want to improve Woods’ odds of advancing to Sunday’s final move the event to Torrey Pines) and is downright smitten with his new and improved short game.

It’s why this week’s Match Play is a curious litmus test for the world No. 2. Sure, he could be sent packing on Wednesday by Charles Howell III and the world would keep spinning, but for Woods all the things that make the WGC so confounding could only add to his budding confidence with a few solid matches.

His affinity for match play is evident. He referenced his victories at his three U.S. Junior and three U.S. Amateur triumphs when asked for his match play highlights on Tuesday.

“I was down in the final all three (U.S. Juniors) and all three (U.S. Amateurs) and came back and won all six of them. It's something I'm pretty proud of,” Woods said. “They're all different in their own way, but the fact that I came back in each one is something that has certainly given me a lot of confidence going forward and when I turned pro.”

Confidence. Some would argue it’s been the missing ingredient the last few seasons as Woods transitioned through a swing change and various injuries.

As a sports psychologist once explained to your scribe the Match Play is a collection of Sundays, each match bringing with it unique challenges normally only found late in final rounds.

For Woods, his Match Play performance in recent years has been a microcosm of the larger picture – getting better but not grooved enough to hold up when success or failure is so absolute.

“I don't have to worry about 155 other guys, it's just one guy in front of me,” said Woods, who has never won the Match Play on the Ritz-Carlton Golf Club. “It's a lot of fun because we don't get a chance to do this very often, and usually it takes three days, sometimes three and a half days to come to a situation where it's one on one (at a stroke-play event). In general it's not the same group, (at the Match Play) we’re going at each other and we know exactly what they're doing.”

Stewart Cink was the last player to drop a championship match to Woods at the 2008 Match Play, a performance Cink dubbed a “defensive masterpiece.” Since then Woods has lost to Tim Clark (2009), Thomas Bjorn (2010) and Nick Watney (2012).

If that’s not exactly the all-star collection of would-be world beaters one would expect to find the explanation is simple – match play. It’s also why this Match Play could offer an interesting glimpse into Woods’ competitive future.