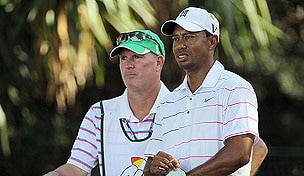 Getty Images
PALM HARBOR, FL - MARCH 21: Trevor Immelman of South Africa hits on the 7th hole during the third round of the Transitions Championship at the Innisbrook Resort and Golf Club on March 21, 2009 in Palm Harbor, Florida. (Photo by Sam Greenwood/Getty Images)  -

ORLANDO, Fla. – With all the chaos, questions and speculation surrounding Tiger Woods, it might seem odd to suggest he needs more acceleration. What most doctors would prescribe is to move out of the fast lane and onto serenity avenue.

Woods shot a bogey-free 65 on Friday in the second round of the Arnold Palmer Invitational and took a one-shot lead before Charlie Wi put on a furious charge and moved into a tie at the top of the leaderboard. Tiger with the lead? That used to be a familiar tune, but we might struggle to remember the last time Woods was out front. No fear; he quickly offers up the answer.

“It hasn’t been that long, you know,' Woods reminded after his round. 'I had the lead at Abu Dhabi this year. So it really has not been as long as people might think it has been.'

While Woods self-proclaimed his second round as “solid,” his jaunt around Bay Hill could have been even lower. Hitting 17 greens, he took 30 putts, which he largely attributed to his pristine speed.

“I had really good control of my speed today,” Woods said. “ I went out there and really focused on my speed, made sure that I had perfect speed every putt and consequently, I made some putts.”

That’s where analysis of his round presents a different story. Tiger thinks his speed was spot-on. In truth, he needed more.

Woods had more than a handful of putts rolling dead center toward the cup that settled short, a few rotations shy of what could have been an even lower second-round score.

Yes, we’re talking apples and oranges here. Tiger’s speed was good. He didn’t have any three-putts – unlike two on Day 1 – but some more speed in Woods’ life could do him good on and off the course. Most literally, he would be three or four shots lower. Metaphorically speaking, he needs to rev the engines – and the psyche – for his upcoming trip down Magnolia Lane.

Woods is searching for his seventh Arnold Palmer Invitational victory this week and if he can deliver, that would mark the second event where he holds seven titles. He also has seven victories at Firestone and six PGA Tour wins at Torrey Pines, plus a U.S. Open there. 'I've had a few places where I’ve felt comfortable and I’ve played well, and this is one of them,” he said.

The 65 in Round 2 ties his second-lowest score at the event and was only bested in 2000 when he shot 64 in his second round. Woods went on to win by four shots over Davis Love III that year.

With so much emphasis on Tiger’s health, his swing changes and any distractions caused by Hank Haney’s book “The Big Miss,” it’s worth noting why a win this week would be particularly significant as he prepares for the Masters. The years Woods secured his four Masters victories – 1997, 2001, 2002 and 2005 – he had a victory to start the season before heading into the year’s first major.

But that's getting ahead of ourselves and ahead of Woods, who says he’s content with the pace he’s setting.

A seventh victory here and a win before the Masters – plus a ‘W’ to end his two-year drought – is exactly the stimulation Woods needs right now.

After Woods pulled out of the WGC-Cadillac on the 12th hole, we wondered if his health would hold up. Now, if he makes it through the weekend, that will be eight days straight of teeing it up.

Woods claims he’s feeling good, he’s making putts and had very few misses Friday. Even the few he had weren’t so far off that he couldn’t recover.

“I just felt that even though my stuff wasn’t as good as it was yesterday, it wasn’t that bad, either,” Woods said.  “I putted better but I wasn’t making any bad mistakes.”

Woods will go off tomorrow in the last pairing alongside Charlie Wi at 1:50 p.m. ET. If he wants the joyride to continue, it’s time he presses on the accelerator.