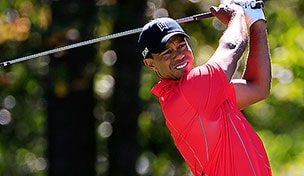 Tiger Woods’ 2013 season is already off to a good start, and he hasn’t even hit a shot yet.

Woods, who makes his season debut this week at the Abu Dhabi Championship, leapfrogged Luke Donald to return to the No. 2 spot in the Official World Ranking.

After his victory Sunday at the Volvo Golf Champions in South Africa, Louis Oosthuizen jumped from sixth to a career-high fourth. Justin Rose dropped a spot, to fifth.

Further down the rankings is where you can find the PGA Tour’s newest star, Russell Henley. The Sony Open winner made the biggest jump of the week, to 50th from 130th. Henley now has invitations to The Masters, Players Championship and PGA Championship, and at No. 50 is in good position to earn a spot in the WGC-Accenture Match Play field.