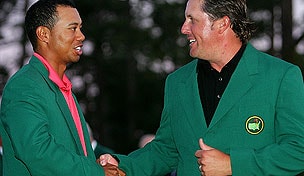 AUGUSTA, Ga. – Tiger Woods is in better form coming to the Masters, but Phil Mickelson may be more confident here.

Woods arrives with the hottest hand in the game again, with a command and confidence we haven’t seen in his play since his career took a detour with his personal woes four years ago.

Mickelson arrives in typically unpredictable form, even confessing he’s nervous without his customary start the week before the Masters, but he will tee it up knowing nobody has shown more command at Augusta National in the last decade.

Woods arrives off three victories this season, off six in his last 20 PGA Tour starts, but if there is any last nagging, gnawing notion of doubt to slay in his return to top form, it is in his ability to close out another major championship. It’s in knowing he hasn’t won a Masters in eight years. It’s in knowing he hasn’t won any major in almost five years and that he struggled with chances to win on the weekend in last year’s U.S. Open, British Open and PGA Championship.

Mickelson arrives having won once this year, but, more importantly, having won three Masters in the last nine played.

Here’s the thing, though. Whether you like Woods or Mickelson, this is your week. This is the event you can watch with near certainty one or both of these titans will tee it up Sunday in contention to win.

You have to go back before 14-year-old Tianlang Guan was born to find a Masters that didn’t end with Woods or Mickelson finishing fifth or better.

You have to go back to 1994 to find a Masters that didn’t end with Woods or Mickelson finishing among the top 10.

Back in 2005, Mickelson put the green jacket on Woods at the Masters trophy presentation. In ’06, Woods put it on Mickelson.

“I think that's what makes the Masters so exciting is having an opportunity to win, playing the back nine with an opportunity,” Mickelson said. “That is what is so enjoyable, exciting as a player. I've been fortunate to come out on top a few years, and I've been unfortunate to have a number of them come close but not quite good enough. But either way, having that opportunity to be in the thick of it, and to feel that excitement, to feel that pressure, to grace Amen Corner knowing that you need birdies, and trying to win a green jacket, that is the greatest thrill a golfer can possibly experience.”

Woods has won four Masters in his lifetime, but he has come so close to winning a closet-full more. He has finished T-4 or better nine times.

“I put myself in the mix every year but last year, and that's the misleading part,” Woods said. “It's not like I've been out of it with no chance of winning this championship. I've been there, and, unfortunately, just haven't got it done. I've been there in the mix on the back nine, and either not executed, not made enough putts, or didn't take care of the par 5s, or whatever it may be.”

That consistent run in contention ended last year, when Woods failed to break par in any round of the Masters and ended up tying for 40th.

That was part of a run of weekend stumbles in the majors last year. At the U.S. Open at Olympic Club, Woods teed it up Saturday tied for the lead. He shot 75 and 13 players passed him. At the British Open, Woods teed it up four shots off the lead on Saturday and shot 70-73 on the weekend to watch Ernie Els claim the claret jug. At the PGA Championship, Woods started Saturday tied for the lead and shot 74 to fall back.

Mickelson, 42, said Woods, 37, still commanded his attention through that.

“I think that even at times where he has not played his best, you know what he's capable of, and so you're always looking at his score,” Mickelson said. “You're always worried about him making that big run the way he's always done throughout his career.

“Now that he's doing it, and winning tournaments in such a dominating fashion, it does have the feel of what we expect to see from Tiger.”

With Woods back at No. 1 in the world, with command of his swing and driver, with his short game, wedge play and putting returning to sharp form, his Masters drought may be nearing an end.

“I feel comfortable with every aspect of my game,” Woods said. “I feel that I've improved, and I've got more consistent, and I think the wins show that. That's something that I'm proud of so far this year, and hopefully I can continue it this week and the rest of the year.”

Mickelson has won three green jackets, but he had his own weekend stumble a year ago that cost him winning his fourth. He started Sunday of the Masters a shot off the lead and derailed his chances nuking his tee shot at No. 4 off a grandstand railing and making triple bogey. He ended up tied for third.

Mickelson said the failure doesn’t add any fuel to his desire to win another Masters.

“There's not one thing that's going to make me more excited for the upcoming Masters, whether it's close, won, or play poorly,” Mickelson said.

Whether Woods or Mickelson wins another green jacket is uncertain; that one of them will at least have a say in who wins is a pretty good bet.