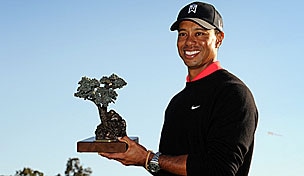 On an agonizingly slow day at Torrey Pines, Tiger Woods hit only three fairways, lost one of his tee balls and played the closing stretch in 4 over.

And it didn’t matter a bit.

Continuing his unprecedented run of dominance at Torrey Pines, Woods was never challenged during his final 11 holes Monday, scrambling his way to an even-par 72 and a four-shot victory over two players at the fog-delayed Farmers Insurance Open.

“It got a little ugly towards the end,” Woods said afterward. “I started losing my patience a little bit with the slow play, lost my concentration a little there. But I got it back on 18. I knew I needed to grind it out and play a three-shot hole and make my par and get this tournament.”

Woods, who finished at 14-under 274, became the first player to win at the same venue eight times. It was also his 75th career PGA Tour title.

“I played great this week,” he said. “Pretty much every facet of my game was going.”

Before the sloppy finish – he was 3 over in 11 holes Monday – Woods seemed destined to either match or surpass his own tournament record for largest margin of victory at the Farmers (eight strokes, set in 2008). Less than five months later, of course, he won the U.S. Open there on a broken leg.

Will he enjoy a similarly prosperous major season this year? Well, history is on his side. When Woods has begun his PGA Tour season with a victory at Torrey Pines, he has won at least four times that year. And he has won a major in five of the six seasons in which he won at the Farmers earlier that year.

Now, though, he’s simply content to erase what had been a bizarre start to his season. Woods missed the cut in Abu Dhabi, but only after being penalized two strokes for taking an improper drop in the second round.

Woods moved eight shots ahead midway through the back nine, but bogeyed the 14th and then lost his tee shot on 15 en route to a double-bogey 6. He dropped another shot on 17. Despite the miscues, he maintained a four-shot advantage as he stepped to the tee of the par-5 18th.

“I started to lose my patience out there because it was just so freaking slow,” he said. “Just over three hours for 9 holes, and three of them are par 3s. It’s like, come on. I started losing my patience a little bit, and consequently I made a few mistakes.”