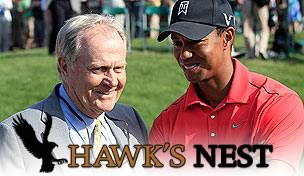 Getty Images
PARKER, CO. - MAY 29: Chien Soon Lu of Taiwan tees off the eighth hole during the third round of the Senior PGA Championship at the Colorado Golf Club on May 29, 2010 in Parker, Colorado. (Photo by Marc Feldman/Getty Images)  -

NOT THAT HE wouldn’t have won by four or five, anyway, but after launching his drive toward a maintenance shed, then receiving 20 yards of free relief because someone had the nerve to erect a fence in front of his golf ball, Tiger Woods was preparing for his second shot on Torrey Pines’ ninth hole Monday when Peter Kostis, of all people, captured the essence of lunacy in 21 words.

“He just drove it 50 yards offline, and these folks wanna stand 5 feet away from him on the next shot?” the CBS on-course analyst wondered aloud.

We see it almost every week: the rush of spectators to an errant tee ball, followed by 30 to 45 seconds of security-supervised chaos, which results in the formation of an alley of yahoos no wider than a Volkswagen Beetle. These people are in need of a mental examination. Have they any idea what would happen if Woods were to miss his line by 3 or 4 feet?

The good news is that Tiger would offer you a handshake and a glove. The bad news is that you probably wouldn’t be around to receive either, as the human skull was not designed to withstand hard objects traveling 140 miles per hour. No wonder the PGA Tour decided to let fans bring their cellphones to tournaments. Now anyone can call the hospital to address the guy lying motionless in the grass right of the seventh fairway.

Seriously, someone’s gonna get hurt out there, at which point the backlash will grow to become as sickening as the sight of the fallen fan. It’s a tough way to make the 11 o’clock news, but again, you may not be around to see it.

AS FOR THE shots he did hit straight, Woods’ 75th Tour triumph served as a pretty fair representation of what I’d call the high-end, post-Haney Tiger. His ball-striking throughout Sunday’s third round was extraordinary. Perfect tempo, an unbeatable rendition of controlled power, which earned him a lead so large that he could hit it shabbily over the final 18 holes and still win with room to spare.

What made this performance memorable was Woods’ short game. It was exemplary from start to finish – not the reason he won, but reason to believe he’ll start winning majors again. At Doral last spring, the guy with 14 big titles could not hit a decent bunker shot. At Torrey Pines, Red Shirt’s bunker play was nearly flawless. He also holed out twice from off the green – shots that carried him through potentially rough patches, and allowed him to coast against a decent field.

When the stakes get higher, the courses get tougher and the competition gets stronger – we commonly refer to these gatherings as major championships – Woods’ ability to salvage pars and economize strokes around the greens is what will keep him in the Sunday hunt. At that point, his competitive tenacity and composure under immense pressure will earn him valuable ground on what has been a dormant climb up Mount Nicklaus.

You’re not going to win a Masters from the wrong fairway. You’re not going to win a U.S. Open playing army golf, no matter how patriotic you feel. Sure, Woods still has terrific ball-striking days on occasion, but this isn’t 2000, when he went weeks without missing a shot. This isn’t 2006, when he won a British Open by ditching his driver, and subsequently, hit more fairways than anyone else.

Times have changed, as has the man himself. The Tiger we saw in the final round at Bay Hill last March was airtight from Tee to Green, which led to a five-stroke victory, but Woods couldn’t sustain that level of precision for any length of time. The Tiger we just saw at Torrey Pines wasn’t as pretty, but they don’t hold majors in beauty parlors, either. In the long run, this Tiger is far more likely to scale the mountain.

HERE IS WHAT I remember about the 2007 Presidents Cup: it took forever for Avis to get me a rental car, and then I got lost in a blur of French signage while trying to find the golf course. By the time I found the place, the U.S. was already crushing the Internationals, and the event was basically over before the end of the first day.

Near the end of play Saturday evening, I was confronted by Charles Howell III, who had a very stern look on his face and was upset about a column I’d written in Golf World listing the 10 players under age 30 most likely to win a major. Howell was seventh or eighth, and that didn’t sit well with one of the nicest guys in pro golf.

At the two big team-match gatherings, it is rare for a player to even acknowledge someone in the media while play is still going on. The pros and their wives walk in a cluster as the last matches reach completion. The veteran writers know there is a certain cache to participating in the event, so you leave them alone, which is another reason Howell’s approach caught me completely off-guard.

Time eventually heals most wounds, however, and CH3 remains one of my favorite people on the Tour. I mention all this because Howell has begun 2013 with three consecutive top-10s – another fast start for a guy whose best golf over the years has been played on the West Coast, whose only victory in the last 10 years came at Riviera in ’07.

Maybe this is the year Howell keeps things going, picks up a victory or two and becomes the player so many thought he would be. Looking at his numbers over time, it’s difficult to understand why it hasn’t already happened. In 2011, for instance, Howell ranked among the tour’s top 25 percent in a majority of key stats: driving distance, greens in regulation, sand saves, scrambling, putting and scoring.

Back when his career was still taking shape, Howell’s inability to win was blamed on his putter. Since 2009, however, those numbers have improved considerably. For someone who appears allergic to fairways, CH3 hits a ton of greens. And when he doesn’t? Howell ranked seventh in up-and-down frequency in 2010, fifth in 2011 and is third in 2013.

Every statistical profile on the PGA Tour tells a story, but this one is the mystery of mysteries. Given that Howell is coming off his worst year on the Tour (a career-low 73rd on the money list), I suspect he’s playing with a greater competitive fire in 2013 – and that he’ll finally begin to redefine himself as a legitimate top-tier performer.

We saw it last year with Brandt Snedeker and Jason Dufner. Hard though it may be to believe, Howell is still only 33, two years younger than Dufner and just 18 months younger than Snedeker. If my man Charles only seems like he’s been around forever, it hasn’t always been easy to notice.

SO THIS GUY whom I’ve done some writing for over the years called last summer and asked if he could bring a couple of his readers to Connecticut and play a round of golf with me. Sure, I told him, and the two cats, both of whom were from Philadelphia, could not have been nicer. Neither was a very good golfer, however, and on Brooklawn CC’s par-4 13th, I was nailed in the calf by a line drive off a 3-wood from about 30 yards away.

I just bent down to feel what is probably a permanent knot in my lower left leg. The dimple pattern on the skin stuck around for about a month, and there were some fairly abnormal shades of blue for a stretch, but I’ve always taken the bright-side approach to the incident. If that ball had been struck 5 feet higher, I wouldn’t be writing this.

Do yourself a favor: if you happen to be following Tiger Woods at a tournament and he hits one in the right trees, which happens just about everywhere he plays, stand behind him. He’s not going to notice you, anyway.