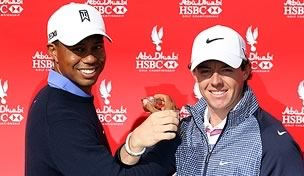 ABU DHABI, United Arab Emirates – Between media grillings and photo ops with a camel in a caddie bib, or whatever it was the ungulate was wearing on Tuesday at the Abu Dhabi HSBC Golf Championship, Rory McIlroy and Tiger Woods stole a quiet moment to catch up.

It’s what friends do, be they childhood pals, college buddies or workplace acquaintances.

Defining the budding relationship between the world’s Nos. 1 and 2, however, is not that simple. When it comes to the game’s alpha and omega no one is exactly sure of the extent of their friendship – be it bromance, big brother or BFF.

It is, by any definition, new territory for Woods, so the media’s fixation with whatever the bond that has formed between Red Shirt and the wunderkind is at least partially understandable.

With the possible exception of Mark O’Meara and John Cook, who were only briefly Woods’ contemporaries, never before in his now 17-year professional career has he let someone in so publicly.

Woods wasn’t so much emotionally unavailable as he was aloof, some would even say gated in by a fishbowl existence. Yet there they were outside the Abu Dhabi clubhouse on Tuesday, goofing and grinning like schoolmates on the first day of a new semester.

“We’ve certainly hit it off, and our relationship has grown and our friendship’s gotten better,” Woods said. “It’s been fun.”

Those with suspicious minds have suggested the Rory-Tiger relationship is born from mutual monetary gain, pointing to Monday’s much-anticipated announcement that the Ulsterman had joined Woods in the Nike Golf fold as Exhibit A. But that seems to be an over simplification at best and a gross misunderstanding at worst.

“It was entirely (McIlroy’s decision),” Nike Golf president Cindy Davis said on Tuesday when asked if Woods had any impact on McIlroy’s decision to join Nike. “That young man is very impressive. He went through the entire process and made the decision himself.”

If all parties are to be believed, and there is no reason to think otherwise, McIlroy’s decision to bolt for the Swoosh was his alone and exclusive to his friendship with Woods that began, of all places, at Abu Dhabi Golf Club a year ago.

It was an impromptu nine-hole practice round on Tuesday before last year’s event that set the wheels in motion for a friendship that at its core seems based on a deep mutual respect and an appreciation of sophomoric humor.

“Before this time last year we would say hello in passing but not really anything else,” McIlroy said. “Once Tiger sort of gets to know you and trusts you, I guess, and lets you in then it’s great.”

Both players suggested familiarity – there were paired together eight times in 2012 – breeds friendship. But if that’s the case, why didn’t Woods develop a similar relationship with Ernie Els or Phil Mickelson – hold your punch lines – after a decade of shared tee times?

No, this goes beyond a bond born of mutual association.

There is, with apologies to armchair psychologists everywhere, an appreciation between the two that appears rooted in a unique understanding of greatness.

Woods, who has been known to put up competitive walls when he’s on Tour, appreciates McIlroy’s talents and the measure of his greatness better than anyone else could. You don’t win two major championships by record margins by accident and few can relate to the work and energy that takes better than a kindred spirit.

“It’s great to just spend time with him and pick his brain about a few things if I feel the need to, but it’s a relationship that’s definitely based on respect,” McIlroy said. “He’s been a huge hero of mine growing up and he’s done some incredible things in golf. I think he respects me for what I’ve done on the golf course, too.”

Unlike Woods’ idolization of Jack Nicklaus, McIlroy didn’t grow up with Woods’ major championship resume pinned to the wall in his room back home in Holywood, Northern Ireland, but the appreciation for greatness was manifest.

Of course the subtext to this bromance is the theory that in McIlroy Woods now has a true rival, a singular talent driven to perfection on par with the standard Woods set early in his career.

But Woods has been here before. Throughout his Hall-of-Fame career he has been paired with no fewer than a half dozen “rivals” – from Mickelson to Vijay Singh to Sergio Garcia. But in the end, none have been able to sustain the challenge, which makes McIlroy’s ascension to the top of the heap that much more enticing to everyone, it seems, except Woods.

“It would be very similar to saying that I had a rivalry with Phil two years into my career. That wasn’t the case. It takes time,” he reasoned on Tuesday. “It’s only been a few years, so let’s just give it time and see how it pans out.”

The same could be said of Rory and Tiger’s friendship, a pairing that should only be nurtured by McIlroy’s recent move to South Florida. McIlroy plays out of the Bear’s Club while Woods seems entrenched at the nearby Medalist Club. If the small unspoken print between the lines is any indication, Woods and McIlroy’s friendship goes well beyond photo ops and business arrangements.

“I’m sure we’ll have a few dinners together and certainly hang out a bit more,” Woods said.

Tiger and Rory, BFFs – at least until Sunday at Augusta National.