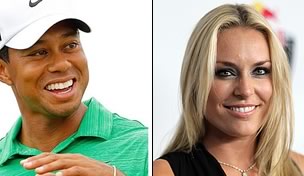 Are Tiger Woods and Olympic gold medalist skier Lindsey Vonn dating? If you believe the rumor mill, the two sports stars have been an item since November.

The rumors died down at the same time other rumors surfaced that Woods was trying to woo back ex-wife Elin Nordegren, but heated back up when it was reported Woods made a pit stop in Salzburg, Austria to see Vonn on his way to the Abu Dhabi HSBC Championship.

The Salzburg News reported that Woods landed his private jet in Salzburg the Sunday prior to the Abu Dhabi event and left Monday. Vonn was in Salzburg at the same time for a TV interview, according to the article. The paper also ran photos of Woods in a Yankees cap (photo below courtesy salzburg.com). Woods, through his spokesman Glenn Greenspan, declined to comment on his personal life.

A Vonn publicist released a statement saying, “Lindsey is currently in the midst of the World Cup season in Europe. Her focus is solely on competing and on defending her titles and thus she will not participate in any speculation surrounding her personal life at this time.'

Outlets such as the Los Angeles Times and USA Today have reported the story and quoted the Hollywood Reporter, which stated a “close source to Lindsey” said the two “met through the ski community, because Tiger is an active skier. Lindsey has been teaching Tiger’s kids, Sam and Charlie, how to ski.”

Late last year, Vonn and Woods were reportedly in Vail, Colo., at the same time. Vonn, 28 and recently divorced, told the Denver Post, “We are just friends. My brother was the ski instructor for his kids this November in Vail. Guessing that’s where it came from.”