Woods 'comfortable with every aspect' of game 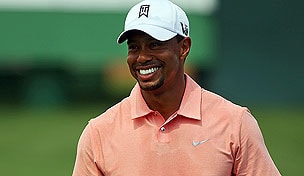 AUGUSTA, Ga. – Players beware: Tiger Woods says he is “comfortable with every aspect” of his game.

That’s the bad news for the other 92 players in the field. The good news is that Woods hasn’t won the Masters in eight years, since his 2005 triumph over Chris DiMarco.

“I feel that I’ve improved and I’ve got more consistent,” Woods said. “I think the wins show that. That’s something that I’m proud of so far this year, and hopefully I can continue it this week and the rest of the year.”

Woods sat down for a 30-minute interview Tuesday at Augusta National. Here are some more highlights:

• On the 14-year-old amateur Tianlang Guan: “He’s not in high school yet. So it’s hard to believe. But he’s so consistent. He knew what he was doing, he knew the spots he had to land the ball and to be able to pull it off.”

• Interaction with Guan, whom Woods played with Monday afternoon: “He asked a lot of questions, whether it’s what am I doing in my game or a strategy on the golf course. A lot of golf stuff. I was asking him about school and stuff like that. What classes are you taking?”

• This is Woods’ 19th Masters: “Scary. Coming up on my 20th. When I first came here at 19 years old, it was a bit overwhelming to play here and to be part of the Masters, to stay in the Crow’s Nest and accidentally run into the champions locker room and all those different things.”

• Augusta National adding Condoleezza Rice as a member: “I think it’s fantastic. It was the right timing. And, knowing Condoleezza over all these years, couldn’t have had a better person.”

• Would he ever become an honorary starter: “What’s the minimum age? 70-plus? Yeah, that’s a long time. Let me just try to get to 40 first.”

• On putting, and it keeping Woods from winning more Masters over the past eight years: “I was there ball-striking wise a few years through that stretch where I think I hit it pretty well. Hit a lot of  greens, just didn’t make enough putts. You have to make a majority of the putts inside 10 feet and you’ve got to be just a great lag putter for the week.”