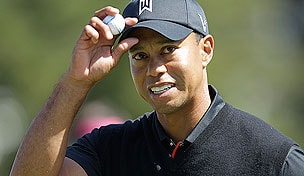 SAN FRANCISCO – On Thursday Bubba Watson reckoned we were seeing the “old Tiger,” but that’s not exactly accurate.

What we have is a hybrid, a new – if not improved – version of the original. Maybe a little damaged, doubting even, but certainly not the old guy. Not the 2000 or 2006 models that won major championships on demand.

The new guy is more measured, more willing to find consensus than perfection, more accepting of well-hit golf shots that end up in out of the way places, like that towering 4-iron at the 17th hole in fading light on Friday on The Olympic Club’s par-5 17th hole.

“I thought I threw it up high enough to land softly . . .” Tiger Woods figured. Instead, his ball raced through the green and down a slope that in some cultures would take a Sherpa to navigate.

But there was no anger, no indignation directed at the golf gods. This is, after all, the U.S. Open and he was made for this.

When he tallied his card Woods signed for an even-par 70, but there was nothing even about it, not after consecutive bogeys at Nos. 5, 6 and 7 that dropped him out of the lead.

This is where patience, which is only slightly less important than putting at the Root Canal Open, turned what could have been a debilitating round into a disaster avoided.

Woods birdied the 10th hole, rolled in a left-to-right 10-footer for birdie at the 13th and parred his way through a series of bad bounces for a share of the lead with Jim Furyk and David Toms.

“That was not easy,” he sighed. “I had a tough little stretch but, hey, we have a long way to go. . . . This is definitely a tournament where you play for a bunch of pars.”

So even when his birdie attempt at the 16th slipped past the cup there was no frustration, or when his second at the 17th raced down the hill he simply shrugged. That’s Open golf.

“I didn’t miss a shot on the last three holes and ended up with three pars,” said Woods, sounding less annoyed with this truth than he would have, say, last year. But then he didn’t play last year’s Open because of injury. Bad bounces are always preferred over bad wheels.

On a long strange trip of a day befitting Bay area legend Jerry Garcia that included a teen-aged amateur (Beau Hossler) atop the leaderboard and the game’s top-ranked player (Luke Donald) and the defending Open champion (Rory McIlroy) heading  home early, Woods and Furyk added a measure of normalcy.

It’s no surprise that Woods, whose three Open titles leave him one behind the all-time leaders in that category, and Furyk, who in 17 Open starts has just two missed cuts and a victory (2003), emerged atop the marquee – quintessential Open specialist at a quintessential Open.

If last year’s Open at Congressional was something of the light version, this year’s edition has a super-sized feel to it, with just six under-par rounds and only three players (Woods, Furyk and Toms) in red figures. It is the kind of Open that tests patience, as well as playing ability.

Consider Woods’ two-day stablemate Phil Mickelson, who made the cut with a shot to spare but it didn’t look that comfortable. If Woods’ play for 36 holes has appeared stress-free, Lefty’s two loops have been downright stressful. Ditto for Bubba Watson, who made up the final leg of the week’s “Big Three” but was headed home at 9 over.

“You don’t have to be off by much,” Woods figured, and for two days he hasn’t looked like a guy with many misses in the bag.

But then he hasn’t looked that far off for some time. Even after his five-stroke Bay Hill breakthrough this year there were no signs of nervous concern that seemed to crop up last year and when he won the Memorial two weeks ago it seemed his confidence had finally caught up with that rebuilt swing.

Whether that all adds up to his first major title since the 2008 Open down the coast at Torrey Pines and Grand Slam No. 15 remains to be seen, but after two long years Woods is finally starting to show signs of the one element that has eluded him – patience.

And it couldn’t have come at a better time.