Woods, Garcia in war of words 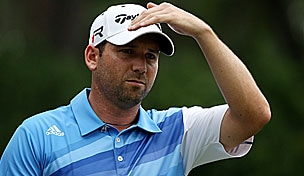 They saved their most compelling comments for after the third round of The Players.

In what was billed as the reprising of their longstanding feud, Tiger vs. Sergio, Round No. 20, did not disappoint. After all, this was an opportunity for Woods to reassert his dominance. This was a chance for Garcia to exact some revenge against his longtime nemesis.

And then they played the par-5 second hole. Follow along.

After their drives, Garcia was on the right side of the fairway, while Woods found the pine needles on the left.

What happened next depends on whom you ask.

This much is certain: Garcia blocked his fairway-wood shot way right, into the trees, and a two-shot swing ensued. Garcia made bogey, Woods birdied, and Tiger briefly seized the outright lead.

Garcia claims that fans had cheered as he started his downswing. The reason? Woods had pulled a 5-wood from his bag, and the fans roared because he was attempting to reach the par 5 in two shots.

Clearly agitated, Garcia muttered to himself for a few holes. He seemed to collect himself after the bogey, however, making four consecutive pars. But on No. 7, he had a brief exchange with a heckler as he prepared to play his second shot.

“Nothing personal,” the 20-something fan told Garcia, “but I hope you miss it.”

Garcia jawed back: “You don’t want to go home early, do you?”

Garcia hit his approach to 30 feet, his final shot before the horn sounded to suspend play because of inclement weather in the area.

Though he hadn’t created much excitement on the course – no birdies on the first six holes before the horn sounded – Garcia opted for pyrotechnics on TV.

In an NBC interview, Garcia blamed Woods for distracting him during the second shot on No. 2.

“I wouldn’t say that he didn’t see that I was ready,” Garcia said, “but you do have a feel when the other guy is going to hit. … I think that I try to respect everyone as much as possible out there. I try to be careful what I do to make sure it doesn’t bother the other players.”

Well, what Garcia said on national television certainly bothered Woods, who was made aware of the remarks during the nearly two-hour delay.

Upon the restart, Woods played his second shot into No. 7 as Garcia waited by the green. Then, the Spaniard didn’t wait for his fellow playing competitor, deciding to attempt his birdie putt while Woods was still walking up toward the green.

They didn’t interact for the next two hours, until play was finally suspended for the day because of darkness.

With both players struggling with their games for much of the day, it appears they saved their best shots for the post-round interviews.

Conducting an interview underneath the clubhouse veranda, Woods was asked about what happened on No. 2.

“Well, the marshal told me (Sergio) already hit so I pulled a club and was ready to play my shot,” he explained. “Then I heard his comments afterward, and it’s not real surprising that he’s complaining about something.”

Did he ever speak with Garcia directly about the incident?

“We didn’t do a lot of talking,” Woods replied, unsmiling.

He spoke for nearly four minutes, then was whisked away by a PGA Tour official.

Less than a minute later, Garcia appeared on the side of the patio. The TV camera lights flipped on.

“It’s very simple,” he started. “You have to pay attention to what’s going on because the other guy is hitting and you do something when you’re in the crowd, and the crowd is going to respond. It’s going to affect the other player. Unfortunately, he didn’t help me very much.

“Obviously, I did hit some bad shots after that, and I’m blaming myself for those. But that was a little bit unfortunate and sometimes you need to be a bit more careful.”

Garcia was then told of Woods’ comments, specifically his remark that it “wasn’t real surprising” the 33-year-old was “complaining about something.”

“That’s fine,” Garcia said. “At least I’m true to myself. I know what I’m doing, and he can do whatever he wants.”

Saturday was merely the latest episode in an ongoing saga between the two high-profile players.

After all, no one has stunted Garcia’s career quite like Woods, dating to their first encounters in 1999.

But it didn’t take long for their relationship to deteriorate.

After finishing second to Woods at the 1999 PGA, the then-20-year-old Garcia celebrated like he won a major – more on that in a bit – when he defeated a flu-ridden Woods in the “Battle at Bighorn,” a made-for-TV exhibition in 2000.

At the 2002 U.S. Open, Garcia complained that play should have been suspended during the second round because of heavy rains. He grumbled to reporters that if Woods had been on the course, play would have been called. Paired in the final round that year at Bethpage Black, Woods shot 72 to Garcia’s 74 and won his second U.S. Open trophy. Garcia, of course, is still majorless.

In the final round of the 2006 British Open, Garcia dressed head-to-toe in canary yellow and was crushed by Woods, 67-73. Afterward, Woods reportedly texted a friend: “I just bludgeoned Tweety Bird.”

In all, they’ve now played in the same group 20 times on the PGA Tour.

Prior to Saturday, Woods had shot the lower score 12 times (and tied four times). Only three times has Garcia carded a better score than his longtime rival, but not since 2006 and never on the weekend.

Through 14 1/2 holes Saturday, Garcia was 1 over par on his round, while Woods was even.

Despite all the bickering, despite all the years’ worth of frustration, Garcia still finds himself firmly in this tournament. With 3 1/2 holes to go in his third round, he is in a tie for second (with Woods and Henrik Stenson), two shots behind surprise leader David Lingmerth.