Tiger, Stricker have helped each other 'for years' 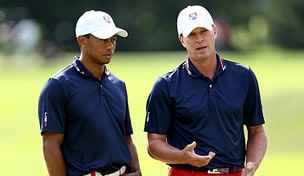 Undoubtedly you’ve heard the story by now: Tiger Woods bumped into Steve Stricker on the putting green Wednesday at Doral. They worked together for about 45 minutes. They went their separate ways. And for the next four days, Woods enjoyed the best putting tournament of his career, requiring only 100 putts over 72 holes and recording 27 birdies en route to a two-stroke victory at the WGC-Cadillac Championship.

Afterward, Woods was asked whether he would have putted as well without Stricker’s help. “I would like to say I probably would have,” Woods told reporters Sunday, “but … there’s a but there.”

It’s easy to imagine the Tour rank-and-file being annoyed that the world’s second-ranked player just got a little better. Depending on your prospective, Stricker either helped a good friend or represented a huge conflict of interest.

Whatever the case, the point is this: Woods says they’ve been giving each other tips for years.

Appearing on ESPN Radio’s SVP & Russillo show on Monday afternoon, Woods was asked whether he would help Stricker if put in a similar situation.

“Oh, we have,” Woods said on the SVP & Russillo show. “We played together a lot in the (FedEx Cup) playoffs last year, and spent hours on the putting green. He wasn’t putting well and we worked on it just about every day.

“That’s nothing new between he and I. We’ve been doing this for years.”