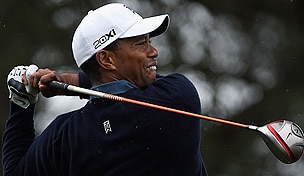 SAN DIEGO – Tiger Woods made it look easy on a dreary day at Torrey Pines and wound up in a place he hasn't been in five years.

He had the 36-hole lead by himself at one of his favorite PGA Tour stops.

Woods didn't miss a shot during a four-hole stretch around the turn on the North Course that included a 5-iron to 5 feet for eagle and a wedge that one-hopped off the pin to set up birdie. It carried him to a 7-under 65 on Friday and gave him a two-shot lead in the Farmers Insurance Open.

Woods was at 11-under 133 and had a two-shot lead over Billy Horschel, with six other players three shots behind. Already a favorite with seven wins as a pro at Torrey Pines, Woods had even more in his favor going into the weekend. He had a 74-0 edge in PGA Tour wins against the next seven players behind him.

Horschel, who had to go back to Q-School to get his card last year, had a 69 on the South Course to get into the final group.

''It's a good day and I'm excited about tomorrow – I get to play with Tiger,'' Horschel said. ''I found out when I tapped in for par. I realized he was leading and I was in second place. So yeah, looking forward to that.''

Woods caught a break in the draw by playing the easier North – it's about 600 yards shorter – on a day of light rain, a late breeze and soft conditions. But he kept the ball in play off the tee, and he got in trouble just once. That was on the par-4 eighth hole when he drove into a tough lie in the bunker, and it led to his only bogey.

There's a simple formula for playing the North – make birdie on the par 5s and pick up a few more on the short par 4s. And that's just what he did.

Woods missed birdie putts inside 8 feet on the opening two holes and was taking baby steps until he took off. It started with a 25-foot birdie putt on the 17th. He followed with the 5-iron that landed just left of the pin on the 18th, a two-putt birdie on the par-5 first hole, and his wedge that took one hop, struck the flag and settled 4 feet away.

It was similar to Thursday on the South Course when he played a five-hole stretch in 5 under, only this time, Woods finished strong. His approach to the seventh spun back and ran over the cup to set up a short birdie, and he finished off his routine day with a 5-wood onto the ninth green for another two-putt birdie.

''Drive the ball well here and you're going to probably have four iron shots into the par 5s,'' Woods said. ''You sprinkle that in with probably four or five wedge shots in there, a round of 6  or 7 under par is definitely conceivable.''

Brad Fritsch, a rookie from Canada, had a 67 on the South Course to lead the group of six players at 8-under 136. The others were Casey Wittenberg, Steve Marino, Jimmy Walker, Josh Teater and Erik Compton, whom Woods referred to as ''remarkable'' for being a two-time heart transplant recipient and being on the PGA Tour.

Defending champion Brandt Snedeker didn't fare so well. After opening with a 65 on the North, he made only one birdie and twice took bogey on the par 5s on his way to a 75 that left him seven shots behind. K.J. Choi, who had a 65 on the South Course, couldn't break par on the easier North and had a 73 to fall five behind.

Phil Mickelson struggled to keep his hands dry in the wet weather and finished bogey-bogey on the South for a 71 to make the cut on the number, though his work isn't over. There were 87 players who made the cut at 1-under 143, meaning there will be another cut to top 70 and ties Saturday.

Still, this had the trappings of another Tiger show at Torrey.

It was his first outright lead going into the weekend against a full field since the Australian Open in 2011 (he finished third at The Lakes), and his first time atop the leaderboard at Torrey Pines since 2008. Then again, he has played only one time at this event since then when he was just starting to change his swing.

Woods is coming off a missed cut in Abu Dhabi last week to start his year.

''I've had beautiful practice sessions at home,'' he said. ''If I can do it there, I can do it out here. Even though last week I played only two days, I felt like I hit the ball well enough to shoot a better score than I did. I had a couple of days to work on it, and I came out here and felt pretty good about it.''

As much as the odds seemed stacked in Woods' favor, the tournament is only at the halfway point and Woods with a 36-hole lead no longer ranks up there with death and taxes. He was tied for the lead going into the weekend three times last year - twice at majors - and won only at Bay Hill.

The final two rounds move to the South Course, which played about 1 1/2 shots harder Friday in the rain. The greens are more receptive, sure, but the course figures to play at full length in wet conditions and at sea level.

''It was amazing how different it played from Wednesday,'' Walker said. ''I played the pro-am here on Wednesday on the South, and you could hardly stop a ball. And today, it didn't matter if you hit a 3-iron in there, it would just stop immediately. You could spin wedges. So it was a lot different, and it played a lot longer too.''

Not only have the seven players behind Woods not won on Tour, four of them had to get cards this year through either Q-School or the Web.com Tour.

But with 36 holes left, more than just those seven are still in the mix. Nick Watney played the first two rounds with Woods was only four shots behind, along with Ross Fisher of England. Charles Howell III, who has tied for third and lost in a playoff in his two starts this year, had a 72 on the South and was five shots behind.

Horschel wades into a big world Saturday, but he believes he has the experience from when he played the Walker Cup in 2007 at Royal County Down.

'There was a guy I competed against three times called Rory McIlroy,'' Horschel said. ''So there may have been 10, 12,000 people following us, and only a couple thousand following the rest of the groups. So I've dealt with crowds. I guess it's a little bit easier playing with Tiger because I guess the group ahead, they move a lot or something. Just hearing what media says. It's going to be exciting.''